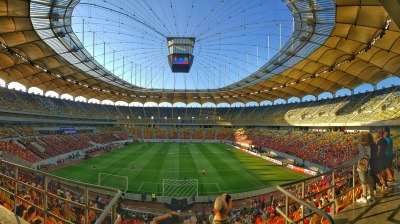 Romania's newly built Arena Națională in Bucharest. New stadiums would need to be built elsewhere in the country in case of a successful bid to host the tournament.
By Carmen Simion in Bucharest November 4, 2018

No Balkan country has hosted a World Cup so far and in the wider Eastern Europe region, only Russia has been a host country for the world’s most viewed sporting event, though Poland and Ukraine jointly hosted the Euro 2012 football championship.

The idea of hosting the football World Cup was raised by Greek Prime Minister Alexis Tsipras and was agreed with the Romanian and Bulgarian premiers, Viorica Dancila and Boyko Borissov, Serbian President Aleksandar Vucic told journalists, N1 reported on November 2.

Several other multi-country bids are expected. So far, a joint bid from Argentina, Uruguay and Paraguay has been. Also, the football associations of England, Scotland, Wales, Northern Ireland and Ireland are considering putting forward a proposal to host the 2030 World Cup, according to the BBC. Another bid could be filed jointly by Morocco, Algeria and Tunisia.

Should the Balkan 4’s bid be successful, the event would be beneficial to the economies of the countries, forcing them to improve their infrastructure and bringing a large number of tourists to the Balkans.

Existing stadiums and transport infrastructure in Romania, Bulgaria and Serbia lags behind those of other European countries. Romania, Greece and Bulgaria are EU member states, while Serbia, a candidate country, hopes to join the block by 2025.

“We are grateful to these countries for the support they have shown for Serbia on its path to the European Union. I told them that dialogues need to be continued with the conviction that we will manage to avoid incidents and maintain the stability which we all need,” Vucic said.

The bill for hosting the event would inevitably be substantial. It cost Russia around $15bn to host the 2018 World Cup, the most expensive football tournament in history. This would be problematic for the three former socialist countries, which lack the modern infrastructure needed to host such an event. Greece, meanwhile, is only now recovering from a severe financial and economic crisis. They would have to direct billions of euro to building new stadiums and improving transport infrastructure.

Romania recently built one modern football arena in Bucharest with a capacity of around 55,000 seats, while the northwestern city of Cluj Napoca hosts a 30,000 seat arena, built in 2011. The Bucharest football stadium is to host four matches during the 2020 UEFA European Football Championship, which be held in 12 cities in 12 European countries.

Romania was due to build a new metro line for the 2020 sports event, but works have not even started and the authorities are working on alternative solutions to ensure fans can get about the Romanian capital. Romania also has to upgrade three stadiums for Euro 2020.

In Serbia, the biggest football stadium in the country, Belgrade’s Rajko Mitic, has a capacity of 53,000 seats. In 1973, it hosted the  European Cup final between Ajax and Juventus.

Despite efforts to build infrastructure for the event, hosting the the World Cup could bring enormous benefits to the SEE countries. Apart from improved infrastructure, which further attract more investors, another industry which could benefit a lot is tourism. More than 5mn tourists, including 2.9mn foreigners, visited the 11 Russian cities hosting World Cup matches, the head of the Russian Federal Tourism Agency Oleg Safonov told a press conference midway through the tournament, Tass reported at the time. Croatia, which unexpectedly made it to the finals, also saw an increase in tourist interest following the event.

The joint organisation of the sports event would also be beneficial to further cooperation between the Balkan countries.