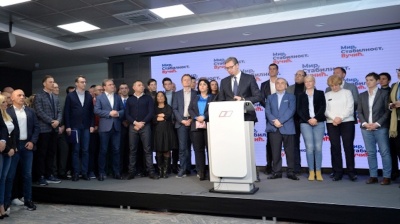 Projections of the results of Serbia’s April 3 general and presidential elections indicate a first round victory for President Aleksandar Vucic and his Serbian Progressive Party (SNS).

The results were expected, though they also indicate opposition parties have made headway among voters and are set to return to the next parliament.

IPSOS/CeSID released a projection of the results late on April 3 based on a sample of preliminary data from the vote count. The projection, based on 62.5% of sample data, shows that Vucic's Serbian Progressive Party (SNS) is set to win 43.6% of the vote.

In second place is the United Serbia coalition with just 12.8% of the vote, and Vucic’s junior coalition partner the Socialist Party of Serbia (SPS) on 11.6%. The right-wing Hope coalition and environmental coalition Moramo (We Must) are also expected to enter the next parliament.

Vucic is also cruising towards another term in the presidency, with IPSOS/CeSID projecting he will score a first round victory with 59.8% of the vote. United Serbia’s candidate Zdravko Ponos is in a distant second place with 17%.

Serbians also voted in several local elections, including in the capital Belgrade.

He released a set of projections from the SNS that were broadly in line with those from IPSOS/CeSID, indicating that the SNS will again be the largest party in the parliament, having won the general election, followed by United Serbia and the SPS.

Addressing his supporters, Vucic said that the war in Ukraine had a “huge” impact on the results of the elections, causing Serbia to move dramatically to the right.

He cited SNS projections that put him at around 60% of the vote in the presidential election, saying that means he received 2.245mn – the highest for any presidential candidate in Serbia in the first round of voting.

"I am proud of the fact that I managed to do something that no one has ever succeeded doing in Serbia," said Vucic.

"It also shows that, which I am unusually proud of, I will probably be the Serb who has been in power in our country for the longest time after [19th-20th century politician] Nikola Pasic.”

Vucic has faced strong pressure from EU leaders to bring Serbia – an EU candidate country – into line with EU policy on Russia and impose sanctions. So far, while condemning the invasion, Serbia has refused to sanction its old ally. This stance appears to chime with the preferences of many people in Serbia, where memories of the 1999 Nato bombings are still strong.

Amid heightened international tensions following the Russian invasion of Ukraine, Vucic is believed to have benefited from a pre-election boost as the stability candidate. This was hammered home to voters through the election billboards all around Belgrade and elsewhere with the message: “Peace. Stability. Vucic.”

High turnout but reports of irregularities

Turnout in the elections – where Serbians were voting in several local elections as well as for the parliament and president – was unusually high, with long queues reported outside polling stations when polls closed at 8pm; those already queueing at closing time were allowed to vote.

Polling stations in Kursumlija, Tutin, Bujanovac and Raska serving voters from nearly Kosovo, who were not allowed to vote within Kosovo, were overwhelmed by large numbers of voters, who arrived by bus during the day.

The elections were also marred by numerous reports of irregularities and several violent incidents. A report from the NGO Research, Transparency and Accountability’s (CRTA’s) observation mission published while voting was underway on April 3 said that the first half of the day was “marked by tensions and verbal attacks, while cases of physical violence were recorded in front of some polling stations as well”.

The Movement of Free Citizens in Serbia (PSG) announced on April 3 that its leader Pavle Grbovic was attacked near a polling station during the morning.

Later in the day, the Do not let Belgrade drown (NDMBGD) opposition movement said that one of its observers, Djordje Trajkovic, had also been attacked at a polling station in Belgrade’s Zemun district after filming SNS activists going door to door urging people to vote, a party statement said. Trajkovic claimed one of the assailants took his phone and deleted the recording.

Meanwhile, Bratislav Jukovic, an MP from the SNS, said he was hit in the face at a polling station in Cacaak when he was trying to vote, as reported by Danas.

CRTA said it has submitted five complaints to the police, two concerning “carousel voting” in Kula and Surcin, and three concerning vote buying identified in Majdanpek, Zitoradja and Cukarica. According to the observation mission, sporadic irregularities were recorded at 10% of polling stations in Serbia and 5% in Belgrade. Irregularities included inadequate preparation of polling stations, parallel voter lists and breaches of secrecy.