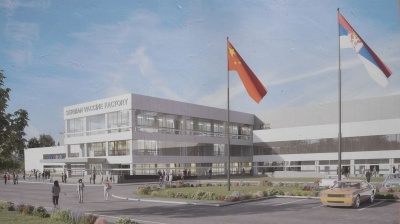 Serbian President Aleksandar Vucic laid the foundation stone for the construction of a vaccine factory of the Chinese company Sinopharm on September 9 in the Zemun settlement of Soko Salas, the Serbian government said in a statement. The factory is a joint venture between Serbia, China and the United Arab Emirates worth €30mn.

Serbia, which already has a factory to produce Russia’s Sputnik V vaccine, is set to become the first European country to make the Sinopharm vaccine too. As well as vaccinating its own population, Serbia also distributed vaccines to other countries in the Western Balkans until they were able to secure their own supplies.

Together with the president, the cornerstone for the factory was laid by Chinese ambassador to Serbia Chen Bo, CEO of Mubadala Kaldun Al Mubarak and CEO of Emirati technology company Group 42, Peng Xiao.

Vucic said that the Serbian vaccine factory will be one of the most modern, and that its construction is important for Serbia and the entire region.

"Serbia will have one of the most modern vaccine factories. I am proud that we have tried to solve some of the regional and world problems … together with our Chinese and Emirati partners,” the president said.

“We will supply only Serbia, but also many countries in the region [and in] Europe, and I believe that we will be able to save many lives. This is a great undertaking for our country.”

He stated that the first plant where Chinese vaccines will be filled will be built by the end of March next year, and in the second phase, by 2023, a plant will be built where the active substance for the vaccine will be produced.

“In the first phase, 180 people will work in the factory, of which 40% will be highly qualified staff, and in the second phase, another 100 workers will be employed,” Vucic said.

The new factory, which will span 11,800 square metres in the first phase, will produce about 30mn vaccines a year, and will have the capacity to produce 40mn vaccines. The plan is for the factory to be completed in the first quarter of next year, until which time the filling of the Sinopharm vaccines will be carried out by local company Hemopharm, the statement said.

Production of the Sputnik V vaccine started at Serbia’s Torlak Institute of Virology, Vaccines and Serums on June 4, making Serbia the first country in Europe to produce the Russian vaccine as well.

Having secured vaccines from multiple sources, Serbia was one of the first European countries to embark on mass vaccination of its population. However, the vaccination rollout has slowed lately, due to high levels of vaccine scepticism and apathy. This has contributed to the latest wave of the pandemic that has seen new cases pass the 5,000 a day mark recently. On September 9, 5,831 new cases were reported.

‘Kamikaze’ drone attacks were reported 80 km from Kyiv in the city of Bila Tserkva on the night of October 4. The drones are allegedly part of the Iranian-made Shahed series, which Russia has used on the battlefields since September.

Spolu politicians have admitted previously that endorsing just one candidate could be seen as a curse, for that person could become a target for voter anger over the soaring cost of living.

The head of the National Bank of Ukraine (NBU) resigned on October 4 citing health-related reasons.

A "rat king" is a collection of rats whose tails are intertwined and bound together, either with hair or sticky substances or by getting tied together.