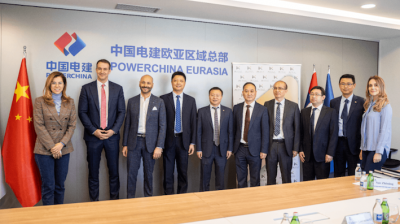 Fintel Energija and MK Group have signed a memorandum of understanding with the Chinese company PowerChina on the joint Agrosolar project in Kula, an investment worth €340mn, MK Group said in a press release on May 4.

According to MK Group, the project, which uses solar energy and at the same time enables sustainable agricultural production under solar panels, is the first of its type in the Balkans and the largest in Europe.

"By signing this agreement, we have defined a clear interest of both sides to take part in the largest agro-solar project in Europe. A particularly important step is the construction of a pilot solar park of 50 kilowatts, which will begin in the next three months," the press release said.

The Agrosolar project will cover 770 hectares in the municipality of Kula. The solar power plant will have a capacity of 660 megawatts, and the planned annual production of green energy is about 832 gigawatt hours, which meets the needs of about 200,000 households.

"In this way, we continue to contribute to the goal of Serbia to increase the share of energy from renewable sources to at least 40% by 2040," said Tiziano Giovannetti, CEO of Fintel Energy.

According to Vukovic, a green hydrogen production plant will be built in the second phase of the project. "Apart from green hydrogen, this technology will also enable the daily production of 300 tons of urea mineral fertiliser, obtained in a completely sustainable way," said Vukovic.

The Chinese company PowerChina is one of the largest construction companies in the world in the infrastructure and energy sector. "We look forward to working on the project and the common goal of developing renewable energy in Serbia and contributing to carbon neutrality," said Yang Bo, PowerChina's representative in Serbia.

Ending coal-fired power generation could prevent 14.5mn premature death from air pollution between now and 2050 and would create up to $16.3 trillion in economic benefits.

If successful, DEM's project to exploit the geothermal energy potential of a dry, unproductive well could be replicated around the world.