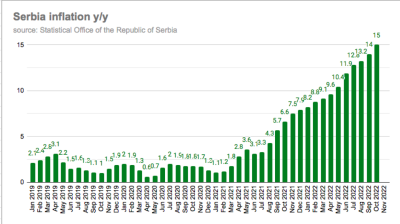 The Serbian central bank announced on December 8 that it decided to raise the reference interest rate by 50 basis points, to 5%, as part of measures to tighten monetary conditions and to limit effects of price increases.

This is the ninth consecutive increase of the key rate. It has now been raised by a total of 400 basis points since April 2022.

The measure enables the National Bank of Serbia to significantly contribute to limiting the spillover effects of import price growth on domestic prices, as well as macroeconomic stability in conditions of increased global uncertainty.

"Deciding to gradually tighten the monetary conditions on the domestic market, the executive board had in mind that the trend of inflation in Serbia, which was 15% year on year in October, is still largely determined by global cost pressures," according to the central bank.

Headline inflation is expected to remain elevated through the end of 2022 and early next year, but will then be on a downward trajectory, with a more significant decline in the second half of 2023.

The executive board expects that the GDP will achieve real growth in the range of 2-3% in 2022 and 2023, and that it will accelerate to 3.5% in 2024, as the effects of factors that influenced lower external demand, as well as due to the planned implementation of investment projects, primarily in infrastructure.

The next session of the central bank's executive board is due on January 12, 2023.