Serbians divided over response to Ukraine invasion but most back neutrality 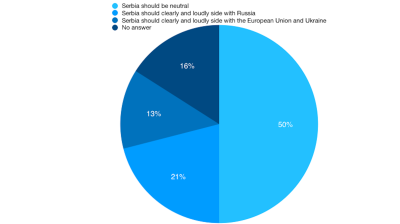 Exactly half of the respondents to a new Demostat poll believe that Serbia should stay neutral over the war in Ukraine and resist pressure to join western sanctions, even if the country suffers as a result.

This is the position taken by the Serbian authorities; President Aleksandar Vucic has condemned the invasion, but also announced that Serbia will not join the sanctions on its old ally. This is despite heavy pressure for Serbia, an EU candidate country, to fall into line with the bloc’s foreign policy.

When announcing Serbia’s position in February, Vucic recalled Serbia’s own experience of western sanctions – during the wars of the 1990s – and “aggression” from Nato members, and pointed to Russia’s support for Serbia during that time. He also pointed to Russia’s consistent support for Serbia by refusing to recognise the independence of Kosovo, which unilaterally declared its independence from Serbia in 2008.

When asked if there is a fear that the Russian-Ukrainian war may spread to the former Yugoslavia, half of the respondents believe that it is a real danger, but more than a quarter still do not believe that anything will happen.

Population decline to take Emerging Europe back to the early 20th century
BALKAN BLOG: Southeast Europe’s ties to Russia prove hard to sever
Serbia to crack down on environmental crime