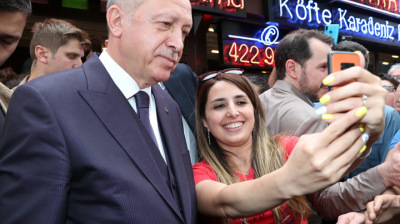 Turkey is set to make "serious" cuts to interest rates, according to President Recep Tayyip Erdogan, who seems to have dispensed with any pretence that the Turkish central bank retains monetary independence.

Erdogan’s comments were reported by broadcaster Haberturk on June 15. They come a week after he fired the governor of the central bank with a presidential decree.

Erdogan reportedly said that Turkey was targeting a reduction in inflation from more than 15% to single digits by the end of the year and also had a target for interest rates over the same time period. Economists expect the central bank, under new governor Murat Uysal, to cut rates by 200 basis points at the next rate-setting meeting, scheduled for July 25.

Turkey’s benchmark interest rate was hiked to 24% last September following the currency crisis that hit the Turkish lira. The central bank has left it unchanged since then, as the economy sank into recession, to prevent renewed losses in the lira.

“We have a certain target in interest rates until the end of the year. We will accomplish this too,” Haberturk quoted Erdogan as saying. “We will reduce this in a serious way. Once this is reduced you will see inflation reduce significantly.”

Erdogan, a frequent critic of high interest rates which, pushing unorthodox theories given little credence by economists, he contends cause high inflation, dismissed previous central bank governor Murat Cetinkaya with the argument that he failed to follow instructions on rates. The national lender had not properly fulfilled its role, he said.

Erdogan is under pressure as—although the markets are relieved that he has not responded aggressively to the humiliation of losing the end of June Istanbul revote to the opposition and there is some confidence that Donald Trump will prevent his officials from visiting swingeing sanctions on Nato member Turkey for its defiance in going ahead with deliveries of the first parts of Russian S-400 missile defence systems—his former economy czar Ali Babacan resigned from the ruling Justice and Development Party (AKP) last week in advance of an expected attempt at founding a new political party that could challenge the Erdogan status quo.

In his first remarks as governor, which were issued by the central bank, Uysal said that under him the regulator would continue to "independently apply monetary policy tools to maintain price stability".