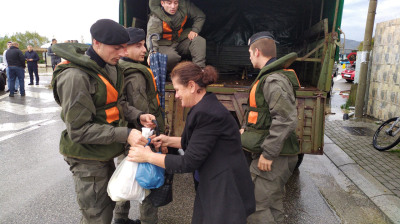 Six deaths have been reported in flooding across parts of Albania, Kosovo, Montenegro and Serbia.

The floods, caused by heavy rain over the weekend, caused chaos in affected areas, blocking roads and forcing the closure of schools and businesses. Flooding is expected to become increasingly common in the region as the climate crisis continues.

Three deaths have so far been reported in Montenegro, two in Albania and one in Serbia.

The worst affected part of Albania is the northern Shkodra region, though flooding has also been reported in other parts of the country. That includes Tirana and Albania’s second city Durres, where roads were closed for several hours.

Two people, a father and son, died when their car fell in a river in the village of Dedaj.

The latest update from the defence ministry on November 21 said the situation remains “problematic” as a “result of the intense rainfall in the country”, especially in the Shkodra and Lezha districts.

Over 240 members of the Armed Forces, with 25 vehicles and special equipment for flooding are concentrated in the two districts, in addition to other operational forces, the update said.

50 families have been evacuated in the municipality of Shkodra and three families from the village of Gruemire after their homes were flooded.

“Since yesterday [November 19], even starting from Friday morning, we have had rains all over Albania, high-intensity rains that have also been accompanied by storms in some cities and regions of Albania, there has been strong wind that has created problems by uprooting road signs and creating other problems with fallen trees and stones,” Minister of Infrastructure and Energy, Belinda Balluku said on November 20, a government statement said.

The weather is expected to improve in the afternoon of November 21, but the rain will not stop until November 23.

Despite the disruption, Balluku noted that for energy “we need more rain”. Albania generates almost all of its electricity from hydropower, and dry weather earlier in the year forced it to make costly electricity imports in the summer and early autumn.

Heavy rain since November 18 caused flooding in several parts of Kosovo, especially the north of the country.

Disruptions to drinking water supplies have been reported, as well as damage to businesses and farmland.

“Precipitation higher than 30 l/m² in 12 hours causes flooding, problems in all agricultural production activities, traffic problems, risk of landslides. Possible personal injury and property damage,” said a statement from the Hydrometeorological Institute of Kosovo published on Facebook on November 20. Rain is expected to continue for most of November 21.

Defence Minister Armend Mehaj wrote in an update on Facebook the authorities are constantly monitoring the situation on the ground.

“After heavy rains that also caused floods in many parts of the country, our official authorities are continuously monitoring the situation on the ground,” wrote Mehaj.

“The KSF [Kosovo Security Force], as always, in any emergency situation, is fully ready, with all its available capacities, to fulfill the legal duty of military support of civil authorities and our citizens without distinction.”

Flooding is reported in northern and central Montenegro, where it has caused the closure of some roads. News agency MINA reported that the level of the Moraca River increased by over four metres in just 10 hours.

Three people drowned on November 20 when their car plunged into the Zeta river near Podgorica. Their bodies have been recovered.

A two-year-old boy is reported to have drowned near the town of Tutin.

Serbian President Aleksandar Vucic issued an order to the armed forces to work alongside the police, a government statement said on November 20.

Vucic said that the state “will do everything to ensure that the citizens of Novi Pazar and Tutin and their property are protected”, and that it will “help eliminate the consequences of the weather disaster”.

Southeast Europe has been identified as one of the world’s “warming hot spots” that will become increasingly vulnerable to heatwaves, droughts and other extreme weather events as global temperatures rise.

The Western Balkans region periodically suffers from flooding caused by heavy rainfall. The most serious crisis in recent years was in spring 2014, when dozens of people died in catastrophic flooding in Bosnia & Herzegovina and Serbia.

More recently, there were heavy floods in several Southeast European countries from Albania to Bulgaria in January 2021. That led to the ‘rivers of trash’ reported as elevated waters picked up plastic bottles and other debris from river banks that gathered behind hydroelectric dams. A year ago, heavy rain caused floods and blackouts in the Bosnian capital Sarajevo.