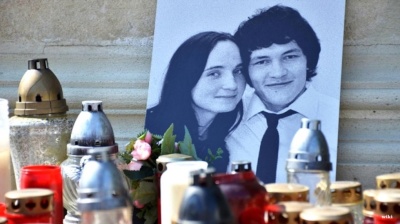 The murders of journalist Jan Kuciak and his fiancée Martina Kusnirova caused an outcry in Slovakia.
By bne IntelIiNews September 3, 2020

Slovakia’s Specialised Criminal Court in Pezinok acquitted the main defendant in the case of the murder of journalist Jan Kuciak and his fiancee Martina Kusnirova, businessman Marian Kocner, and released him from custody on September 3, as confirmed by STS senate head Ruzena Sabova. Another defendant, Alena Zsuzsova, was also cleared. The prosecution may appeal.

Kocner was suspected of ordering the murder of Kuciak, but Sabova noted there was not enough evidence that Kocner and Zsuzsova committed the crime.

Only one of three defendants, Tomas Szabo who helped the murderer, former Slovak soldier Miroslav Marcek, was found guilty and sentenced to 25 years in prison.

In April, Marcek was sentenced to 23 years in prison for the murders of Kuciak and Kusnirova in 2018, and the murder of entrepreneur Peter Molnar in 2016. At the beginning of the trial, Marcek pleaded guilty and co-operated with the police after his arrest and expressed regret for the murders. Marcek will have to pay financial compensation to Kuciak's parents of €140,000, €70,000 to Kusnirova’s mother and €40,000 to Molnar’s family.

According to Investment Minister and For the People party head Veronika Remisova, in light of the public's lack of confidence in the Slovak police, prosecution service and courts, the verdicts in the case fuel doubts about justice.

“The verdict in the case of the murders of Jan Kuciak and Martina Kusnirova opens up a new stage in the fight for justice in Slovakia,” said Remisova, quoted by the Slovak News Agency, adding that in her view this is a new phase "of a harsh fight against the power of those who still rely on a system of corrupt judges, lawmakers and state clerks".

Slovak President Zuzana Caputova said she was shocked to hear the verdict and she insisted on having the reasoning behind it explained. “The verdict of the court shocked me, and I need to understand the reasoning. I respect it, but I expect that the search for justice won't end here and that it will continue at the Supreme Court. I'm thinking of the parents of Jan and Martina, and I wish them a great deal of strength in this difficult situation. They along with all of us deserve to see those who ordered and mediated the murders held accountable,” she said to the news agency.

Kocner was only found guilty of illegal possession of weapons, for which he has to pay a fine of €5,000 or spend five months in prison if he fails to comply.

Zsuzsova was, however, immediately detained by the police again as she has also been charged in other murder cases, including over the murder of former Hurbanovo (Nitra region) mayor Laszlo Basternak who was murdered on July 9 2010. Zsuzsova is also accused of preparing the murders of Special Prosecutor's Office prosecutor Maros Zilinka, Prosecutor-General's Office prosecutor Peter Sufliarsky and lawyer Daniel Lipsic.

Kusnirova’s mother Zlatica Kusnirova said she hopes that the Supreme Court will reverse the verdicts. “It's wrong; it shows that justice hasn't taken up office in Slovakia yet. We continue to fight,” she said, quoted by the news agency. Also Jozef Kuciak, father of Jan, stated that he is convinced of the guilt of Kocner.

Kuciak and his fiancée were killed in Kuciak's house at Velka Maca in February 2018. Their murder was unprecedented in the modern history of Slovakia, causing a wave of massive protests in the country and resulting in then Prime Minister and Smer-SD chair Robert Fico stepping down. Fico’s cabinet was replaced by one led by Peter Pellegrini, also of Smer-SD.

Representatives of Smer-SD and its coalition partners have, however, rejected the allegations. “I have never met Peter Toth or Alena Zsuzsova in my life. I have met Marian Kocner just once, roughly in 2014. I also met Boris Kollar at that time, as both of them were interested in entering politics. I turned both of them down, as well as the help that they offered me,” said Danko, as cited by DennikN.

US pledges up to €1bn for EU's eastern Three Seas region