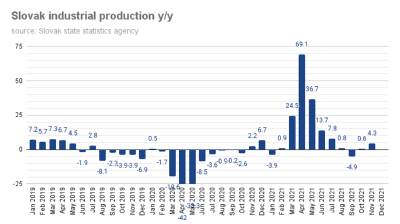 Following two months of decline, Slovakia's industrial production went up again, by 4.3% year-on-year in November, exceeding the pre-pandemic level by 6.7%, mainly due to a growth in electricity and gas supplies (up by 11.7% y/y),  shows data produced by the Slovak Statistics Office.

“A growth in manufacture of machinery and equipment continued for the twelfth consecutive month, up by 15.3%. The manufacture of metals and fabricated metal products increased by 11.5% y/y, while the manufacture of rubber and plastic products by 9.8%. These four manufacturing activities significantly exceeded the pre-pandemic level of November 2019,” the office said.

On the contrary, the manufacture of transport devices posted an annual drop by 10.8% y/y in November, despite the shortage of input materials in the automotive industry.

“November showed that problems on the supply side still haven't disappeared completely, despite a massive improvement. Production in the sector remains way below its capacities," stated UniCredit Bank analyst Lubomir Korsnak, adding that the automotive industry was the last sector of the processing industry to record an annual decrease in output.

According to Korsnak, the mood in Slovak industry shows that it might record relatively optimistic figures in December, however, the beginning of this year is affected with issues over supplies of components.

"The automotive industry's output again decreased on a y/y basis in November, but the drop has been lower each month," stated Slovenska Sporitelna analyst Matej Hornak.

Monthly, after seasonal adjustments, industrial output in Slovakia rose by 3.5% in November. As Korsnak pointed out, the m/m increase in industrial production can mainly be attributed to manufacturers of transport devices.

Russian inflation falls again to 14.9% in August, fears of a deflationary spiral grow

Austria, Croatia and Serbia were the top sources of foreign direct investment in Bosnia in 2021.

Latvian unemployment rate at 6.6% in 2Q

Latvia’s unemployment rate fell slightly to 6.6% in 2Q of 2022, the Labour Force Survey published on August 16 by the country’s Central Statistical Bureau shows.

Polish GDP expansion slowed down to a seasonally adjusted 4.5% y/y in the second quarter after expanding 9.2% y/y in the preceding three months.

Russia’s EconMin seen as overly optimistic with another GDP upgrade

Russia’s Ministry of Economic Development is preparing a revised macroeconomic forecast for 2022, revising the GDP decline to 4.2% from the previously forecast 7.8% contraction -- the mildest forecast yet for this year's contraction.

Russian inflation falls again to 14.9% in August, fears of a deflationary spiral grow
15 hours ago
FDI in Bosnia rose by 35% y/y in 2021
18 hours ago
Latvian unemployment rate at 6.6% in 2Q
1 day ago
Polish economy in much sharper downturn than expected, Q2 GDP data show
1 day ago
Russia’s EconMin seen as overly optimistic with another GDP upgrade
1 day ago