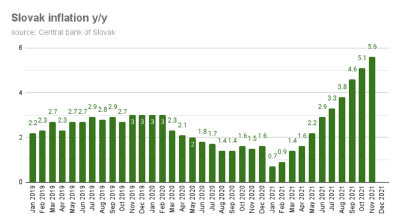 Slovakia´s inflation reached  5.6% in November, with core inflation standing at 6% and net inflation at 6.4%, recording the highest level in the past 17 years, driven mainly by increasing prices of food, housing, and energy, the Slovak Statistics Office reported on Tuesday.

"As in previous months, we mainly paid more for fuels and tobacco in November when compared to last year. The growth rate of prices of food and non-alcoholic beverages accelerated as well. Meanwhile, more expensive construction materials influenced an increase in housing prices. Among the items to post significant y/y growth in November were prices of catering in school canteens," commented WOOD & Company analyst Eva Sadovska, quoted by the Slovak News Agency.

Sadovska expects year-end inflation of around 3% in 2021. “We assume that the growth rate of prices of food and non-alcoholic beverages will accelerate even more in December – to some 5%. Inflation might even exceed 6% in the case of food in the 1Q22," she noted.

"Overall inflation will speed up to some 5% on average in 2022. The ceiling should be reached as early as in the first quarter of next year at 6-7%, and a gradual slowdown should follow," Sadovska added.

Jana Glasova, a 365.bank analyst, said inflation is assumed to go up in the next few months, with consumer prices growing by between 5-6%.

"Year-end inflation should stand at some 3%, fuelled mainly by higher prices of production inputs, construction materials, fuels, farm commodities and foodstuffs. However, the third pandemic wave will shuffle the cards during the winter months as well and could have a dampening effect on inflation,” she said, adding that higher energy prices will join inflationary pressures as of the beginning of 2021.

The inflation expectations of the Russian population fell 6pp in March to 12.5%, as consumers feel the relief of the rapid stabilisation of the economy thanks to the fast action of the Central Bank of Russia.

Russia’s CBR reserves down $43.7bn since the start of the war

Russia’s gross international reserves (GIR) held by the Central Bank of Russia (CBR) have fallen from $629.4bn on February 25 to $585.7bn as of May 13, a fall of $43.7bn according to the latest data released by the regulator.

The industrial price inflation in April was the second-highest since last November when Gazprom began charging much higher prices under a new contract.

The volume of construction works in Romania increased by 6.5% y/y in the first quarter of 2022.

Trust in TV news is declining among Russians, as social media news gains popularity. At the same time, Russian support for the war in Ukraine appears to be slipping, as does the belief that Russia is winning a global power struggle.