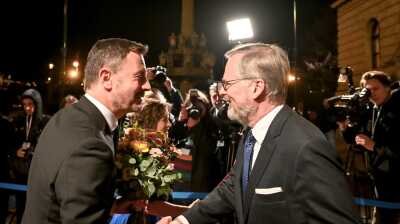 Slovak Prime Minister Eduard Heger posted on his Facebook profile on January 17 that he is given up his attempt to secure a new majority in the parliament to back a reconstructed cabinet. The statement comes after Heger’s former coalition partner party, the neoliberal SaS, said they won’t be backing his cabinet.

Heger of the centre-right populist OLaNO party is currently heading a minority caretaker cabinet after losing a vote of no-confidence in December. He has been given until the end of this month to rebuild his government by President Zuzana Caputova.

“As of this day, I consider all efforts to create a new 76 [majority] terminated given that votes from SaS are missing,” Heger posted and added that “now it is appropriate to discuss early elections”.

SaS left Heger’s coalition in September, depriving it of the majority in the Slovak parliament of 150 deputies, and in December it toppled the cabinet with the help of opposition deputies. A deep animosity between SaS leader Richard Sulik and Igor Matovic, the leader of OLaNO, has fuelled the protracted crisis, which has obstructed the government from tackling the ongoing cost of living crisis.

The erratic Matovic was dismissed from the caretaker cabinet late in December as part of a deal to pass the 2023 budget. Last week, Slovak media reported that Heger and Minister of Defence Jaroslav Nad may leave OLaNO to form their own government as a rift with Matovic was becoming apparent also within the OLaNO party.

In a video statement to the media and Slovak citizens, Heger reiterated that SaS had been interested in reconstructing a majority-backed cabinet shortly after the vote of no-confidence in December and he cited contacts with SaS deputies over this matter.

Following the latest SaS stance, however, Heger said he is going to “invite representatives of OLaNO, Za ludi, Sme rodina, and SaS to discuss the date of early elections”.

“At the moment the most realistic date [for early elections] appears to be in the autumn”, Heger concluded.

Regular elections are due in February 2024. This Saturday Slovaks will vote in a referendum called by the opposition on shortening the cabinet's term, however it is not expected to attract the required 50% participation to take effect.

Caputova has said that if the government is unable to win back a majority,  the parliamentary parties must agree on early elections. If it fails to do so, she has hinted she could appoint a technocratic government, though this would be her least favourite option.

“All efforts should therefore be directed towards the only reasonable solution in this situation. That is why I insist that parliament take decisions by the end of January leading to early parliamentary elections,” Caputova said, according to Euractiv.sk.

Caputova reiterated her message in a video address to the media midday on Wednesday adding that after Tuesday's developments, she prefers early elections in the first half of this year but that the "September date is still acceptable" to her "if political parties find consensus" on such date.

VISEGRAD BLOG: When Eastern European states speak out they are now listened to
Slovak former coalition allies agree on September 30 election
No tanks for Ukraine at Ramstein meeting

Rostelecom already controls another "big four" mobile operator, Tele2 Russia, and the acquisition of MegaFon would result in large-scale state consolidation of the TMT sector.