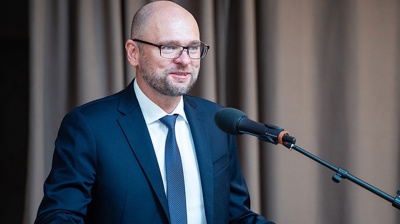 Richard Sulik had already offered to resign his post if Igor Matovic did. / Website of Richard Sulik
By Albin Sybera September 1, 2022

Chairman of the SaS party and Minister of Economy Richard Sulik resigned on Wednesday, as a deadline set by SaS for Minister of Finance Igor Matovic’s (OLaNO) departure from the cabinet passed.

Other SaS ministers postponed their resignations to Monday to give more time to Matovic to leave the cabinet. The populist OLaNO party said Matovic will do so if the rightwing SaS supports OLaNO’s 10-point package of policies largely concerning with dealing with energy crisis.

Some of these measures were previously contested by SaS but Matovic went behind the backs of his rightwing coalition partners in June to push them through with the help of opposition neo-Nazi deputies.

Sulik said that he was ready to discuss the measures, but only once Matovic left the government. "We are requesting the fulfillment of our demand, and that is the exit of Igor Matovic," Sulik said, according to Reuters.

The main stand-off comes down to a personal conflict between Sulik and Matovic, whose impulsive and populist behaviour has been bringing the four-party coalition to the brink since last year. Sulik had already offered to resign his post if Matovic did.

“We are giving him [Matovic] a couple of days to do what practically the entire country expects him to do,” said Sulik as he announced that the other SaS ministers would withhold their resignations until Monday. If SaS leaves the coalition, the cabinet of premier Eduard Heger (OLaNO) will lose its majority in the Slovak parliament.

Slovak President Zuzana Caputova called on Heger to explain to the public how a cabinet without a majority will govern, and “how it will obtain support for important legislation”.

If SaS leaves the government, it will become a tandem of two personal populist parties, Matovic’s anti-corruption movement OLaNO, and Boris Kollar’s radical rightwing force, We are Family, which sits with Marine Le Pen’s National Rally in the European Parliament.

There is also a risk of deadlock that could lead to early elections that bring former premier Robert Fico back to power.

Caputova  openly criticized Matovic for coming up with another ultimatum on the very last day of the ultimatum set by SaS, adding that “nobody is interested” in “prolonging the never-ending saga” between Matovic and Sulik.

Slovakia is having a hard time coping with the financial and energy crisis amid the tense geopolitical situation. The number of Slovak pensioners falling into poverty is rising as they constitute one of the most vulnerable parts of the society that are unable to afford the dramatically rising costs of living.

Some Slovak production plants have decided to halt production, including aluminium plant Slovalco, causing hundreds to lose their jobs.

Caputova also warned against the collapse of health sector. “People are falling into income poverty and their wrath is reaching record levels. We cannot be hazarding with their patience” added Caputova.

Populists and extremist opposition parties have been preying on the energy and coalition crisis,  calling for early election.

As Slovakia celebrated Monday’s anniversary of the 1944 Slovak National Uprising brutally crushed by the Nazis, ex-premier Robert Fico, who faces charges of criminal conspiracy relating to his time in office, and his SMER party brought representatives of the Russian and Belarussian embassies to the commemoration in Zvolen, Central Slovakia,  sparking condemnation from all leaders of the ruling coalition.