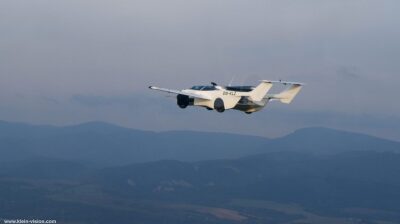 The AirCar flew from Nitra to Bratislava then transformed into a car to continue its journey to the city centre. / Klein-vision
By bne IntelliNews June 28, 2021

The flying AirCar car designed by visionary Slovak designer Stefan Klein has completed an 80 km flight from Nitra to Bratislava in 25 minutes, local media reported. This was the first flight by the vehicle between two international airports and the longest flight in distance at an average speed of 170 km/h.

After the flight, the vehicle underwent a mandatory after-flight check then was transformed into car mode and continued to the city centre on the ground to demonstrate all of its modes.

"With today's flight, we wanted to demonstrate the capabilities of this experimental prototype as well as prove that the idea behind this means of transportation is realistic," Klein told local media.

Klein, a university professor of transportation design, has been working on his concept of flying cars since the change of regime in 1989. He completed the flying prototype of AirCar that was tested successfully at Nitra airport in October 2019.

Klein was in charge of the development of the first Slovak flying car Aeromobil. AirCar differs significantly from this prototype not only in appearance but also in the way it transforms from aircraft to car. The transition from an airplane to a car normally used in road traffic takes about two and a half minutes.

Those seeking to order a flying car to avoid getting stuck in traffic jams still have to wait.

The first prototype must complete the mandatory 50 hours of test flights. Klein is planning to build a second prototype with a new design and more powerful propulsion, which will allow a substantial increase in cruising speed. The vehicle will require an international certification from the European Aviation Safety Agency (EASA).