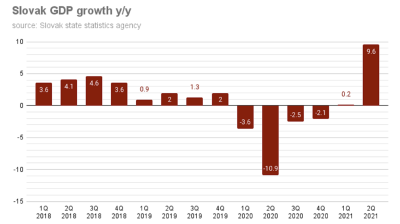 “This sharp increase was expected, as the comparison base was 2Q20, when GDP decreased by 10.9 % due to the pandemic,” the office report read. The volume of GDP at current prices amounted to €24bn, up by 11.8% y/y.

"These positive developments were indicated by our clients' payments, as well as by revenues in retail, where we saw a significant recovery after the easing of [pandemic] measures mainly in specialised outlets, such as those selling footwear and clothing. Meanwhile, the summer season and fewer restrictions also favoured the hospitality sector, which was given some space to breathe," said Slovenska Sporitelna bank analyst Matej Hornak, the Slovak News Agency quoted as saying.

The total gross value added amounted to €21.4bn in 2Q21, up by 9.3% y/y, with wholesale, retail, transportation, accommodation and food services reaching or exceeding pre-pandemic levels by almost 12%, real estate activities by 1.2% and public administration at the pre-pandemic level.

The 365.bank analyst Jana Glasova noted that industry and services are the main pillars of further growth. "If we manage to get through the third wave without shutting down the services sector, we expect that in addition to exports, domestic consumption will be a workhorse of the economy," she said.

Both foreign and domestic demand grew annually in 1H21, up by 23% and 2.5% respectively. Final consumption expenditures fell by 0.5%, while expenditures in public administration increased by 3.5%.

Hornak expects Slovakia´s GDP to increase by 4.2% this year, followed by 4.8% growth next year. "This will partly be facilitated by the EU's recovery plan and the drawing of EU funds," he added.