Slovakia ́s industry in July rebounds to 2.8% following a drop in June 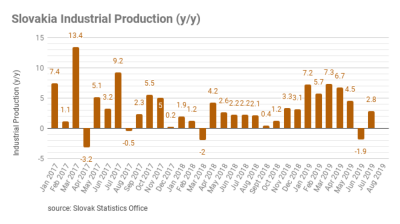 The automotive industry reduced the overall y/y growth of industry by 1.32 percentage points (pp) in July.

“Following the surprisingly steep fall of Slovakia's industry in June, this slightly recovered at the beginning of the summer. However, the y/y growth rate of the industry still significantly lags behind the pace from the beginning of the year,” UniCredit Bank Czech Republic and Slovakia analyst Lubomir Korsnak said, as quoted by the Slovak News Agency (SNA), adding that the figures during summer months are often distorted by regular holiday operational breaks, which are disproportionately divided between July and August.

“For stronger conclusions we must, therefore, wait for the August figures that might confirm or rebuff the July stabilisation of industry. Nevertheless, we expect that this year's holiday effect might have been distributed similarly as last year and that August will rather confirm a moderate growth of Slovakia's industry,” he added.

Also the petrochemical industry recorded slow down in its growth, with its output posting a fall by 35.4% y/y in July, reducing the average y/y increase of Slovakia's industry by 1.17pp.

Slovenska Sporitelna analyst Katarina Muchova said that production of electric appliances influenced the industrial output growth in July the most, increasing by 36.8%, followed by the manufacture of machinery and other equipment (up 19.3%) and manufacture of rubber and plastic products (up 10.7%).

According to Korsnak, Slovakia's industry will struggle with weakening external demands in the upcoming months, with the automotive industry returning to a more stable y/y growth in the autumn. “On the other hand, we expect producers of machinery and electrical equipment to succumb to the cyclic deceleration as well, despite strong figures from the first half of the year,” he noted, cited by SNA.

Revenues in industry recorded a y/y drop for the second consecutive month, falling by 3.6% in July, mostly due to decreases in supplies of electricity, gas, steam and cold air (down by 16.2%). The total revenues in industry accelerated by 3.6% y/y in 7M19. The average nominal salary in industry increased by 2.8% y/y in July to €1,158.

Turkey sees unexpected rise in inflation as lira weakness pushes up prices
2 days ago
Russia's services PMI bounces back to 35.9 in May from a record low of 12.9% in April, but business still contracting
2 days ago
Easing of lockdowns offers hope to emerging Europe’s COVID-struck economies
3 days ago
Kazakh manufacturing ekes out PMI expansion in May
4 days ago
A third of Russians are ready to participate in a mass protest against falling living standards
3 days ago