Slovakia´s inflation a surprise 2.7% in March 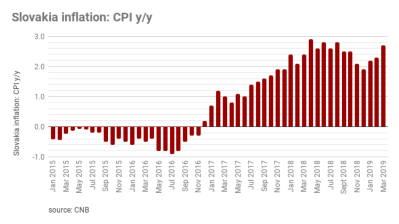 Slovakia’s consumer price inflation year-on-year in March 2019 was a stronger than expected 2.7%, according to the Slovak Statistics Office
By bne IntelliNews April 16, 2019

Slovakia’s inflation came at a higher than expected 2.7% year-on-year in March, up from 2.3% in February, affected by regulated prices by 0.01 percentage point (pp) and indirect taxes by 0.06pp, the Slovak Statistics Office reported on April 15.

Analysts were not expecting the surge inflation, according to UniCredit Bank Czech Republic and Slovakia Lubomir Korsnak. Core inflation stood at 2.4%, driven by food prices by 0.19pp, and net inflation at 2.1%. Cumulative inflation was influenced by core inflation by 0.55pp month-on-month in March. “Prices rose in the divisions of transport by 2.5%, alcoholic beverages and tobacco by 1.6% and housing, water, electricity, gas and other fuels by 0.2%,” the Office reported.

In m/m terms prices grew by 0.6% in total, with growth in transport by 2.5%, in alcoholic beverages and tobacco by 1.6% and in food and non-alcoholic beverages by 1%. Prices in household furnishings and regular household maintenance dropped by 0.2% m/m. In 3M19 prices increased by 2.4% y/y.

“On average, over the first three months of 2019 compared with the same period of 2018, index of consumer prices increased in households of employees by 2.3%, in household of pensioners by 2.8%, in low-income households by 2.5%,” the Office concluded.

“Inflation is expected to be close to March figures in the coming months. The open question remains how quickly retail chains will adjust food prices downwards after cancellation of a special levy, and to what extent this decline will be corrected by other factors (input prices, labour bonuses) that have pushed food prices up in recent months,” Korsnak said, reported by online Sme.sk

Demand-pull inflation pressure should stabilize and gradually begin to moderate at the turn of the year, under influence of weakening economic growth. “Lower demand pressures should be fully reflected in inflation in 2020, when we expect it to return just below 2%,” Korsnak added.

Turkey sees unexpected rise in inflation as lira weakness pushes up prices
1 day ago
Russia's services PMI bounces back to 35.9 in May from a record low of 12.9% in April, but business still contracting
2 days ago
Easing of lockdowns offers hope to emerging Europe’s COVID-struck economies
3 days ago
Kazakh manufacturing ekes out PMI expansion in May
3 days ago
A third of Russians are ready to participate in a mass protest against falling living standards
3 days ago