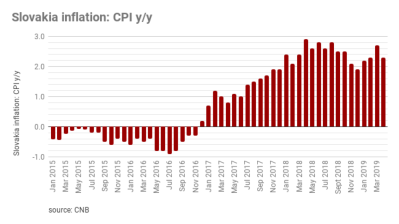 Slovakia´s inflation slowed to 2.3% year-on-year in April, down from 2.7% in March. Core inflation stood at 1.9% and net inflation at 1.6%, the Slovak Statistics Office reported on May 15.

The Czech Republic and Slovakia analyst Lubomir Korsnak of UniCredit Bank said Slovakia´s April inflation was less pronounced than expected partly due to a decrease in the prices of flight tickets.

Month-on-month total inflation was influenced by core inflation by 0.20%age points (pp) in April and by regulated prices by 0.01pp. Indirect taxes had no effect on cumulative inflation.

A significant drop in demand inflation in April had nothing to do with considerable easing of demand pressure, but it was rather down for y/y cheaper flight tickets as well as prices of alcoholic drinks. Korsnak estimates inflation to stand at 2.5% in the next few months.