Slovakia´s inflation up again to 2.7% y/y in May 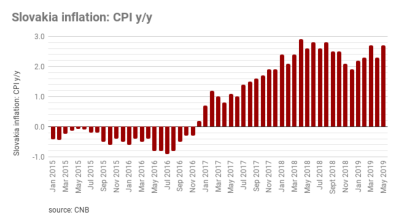 Slovakia´s consumer prices rose again, up 2.7% year-on-year in May and by 0.4 percentage points (pp) month-on-month, ahead of the consensus forecast of 2.6%
By bne IntelliNews June 17, 2019

Slovakia´s consumer prices rose again, up 2.7% year-on-year in May and by 0.4 percentage points (pp) month-on-month, ahead of the consensus forecast of 2.6%, the Slovak Statistics Office announced on June 14. Core net inflation stood at 2.3% and 1.9%, respectively.

Consumer prices grew y/y in restaurants and hotels by 4.2%, in housing, water, electricity and gas by 4.1%, in food and non-alcoholic beverages by 3.9% in telecommunications services by 0.8%, while prices in transport fell by 0.5% y/y in May. In 5M19, consumer prices in Slovakia swelled by 2.4% on the year.

According to the National Bank of Slovakia, inflation rate should amount to 2.4 % this year with core inflation standing at 2.2%. It should oscillate around 2.5% in the next three years.

Ukraine's Economics Ministry forecasts 3.9% economic contraction in 2020
5 hours ago
Russia's National Welfare Fund steps up again to $157.2bn, or 11% of GDP, in March
3 days ago
Small countries in Balkans and South Caucasus most exposed to tourism industry collapse
4 days ago
Capital Economics slashes CEE growth forecasts for 2020 to -2% y/y
5 days ago
Ukraine industrial output falls 1.5% in February
6 days ago