Slovakia's consumer prices up by 2.7% y/y in October 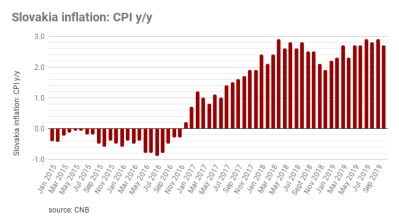 Slovakia's consumer prices increased by 2.7% year-on-year in October, the second highest inflation rate within the EU.
By bne IntelliNews November 18, 2019

Slovakia’s consumer prices increased by 2.7% year-on-year in October, the second highest inflation within the EU, which is partly the result of the European Central Bank's (ECB’s) “extreme policy”, according to Saxo Bank analyst John Hardy. In month-on-month terms, consumer prices dropped by 0.1%, the Slovak Statistics Office reported on November 14.

“If we look into the past, ten years ago you could buy significantly more goods in Slovakia than, for instance, in France. However, in the wake of high inflation the prices have quickly swelled almost to match those of Western Europe. Slovakia is one of the countries where zero or negative ECB rates are unquestionably detrimental. Furthermore, at a time when the rate of indebtedness is rising to all-time highs, the ECB policy poses a great risk,” Hardy said, the Slovak News Agency reported.

He added that the country should invest more into infrastructure, digital networks and digitisation.

Slovak court says referendum on snap election would be unconstitutional

Bulgaria’s central bank revises up 2021 economic growth forecast to 4.1%
3 hours ago
Average gross wage in Slovenia up by a real 3.9% y/y in May
2 days ago
Polish retail sales ease growth to 8.6% y/y in June
2 days ago
Natural disasters caused €80mn of damage to Croatian agriculture in 2021
3 days ago
Poland’s industrial production eases growth in June
3 days ago