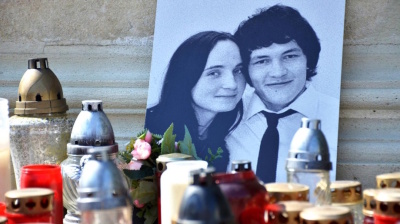 Investigative journalist Jan Kuciak and his fiancee Martina Kusnirova were gunned down in their home in Velka Maca in the Trnava region on February 21, 2018.
By bne IntelliNews February 22, 2022

Slovaks commemorated the fourth anniversary of the deaths of the investigative journalist Jan Kuciak and his fiancee Martina Kusnirova in their home in Velka Maca in the Trnava region on February 21, 2018. On this occasion, the provisional memorial site standing on SNP Square in Bratislava was replaced by a permanent one, the Slovak News Agency (TASR) reported.

The parents of both young people were present at the unveiling ceremony. "We also thank those who are trying to make sure that what happened and how it happened isn't forgotten," Martina´s mother Zlatica Kusnirova was quoted by the news agency as saying.

"The open wound that the work represents also symbolizes what was under the surface in society, the layers and overlaps that Jan tried to uncover with his work," said guarantor of the project Marian Kralik, according to news agency TASR, adding that the memorial should to a certain extent remind the public of the brutality of the murder itself.

Slovak President Zuzana Caputova honoured the memory of Kuciak and Kusnirova, saying that "four years ago, the majority of society united in demanding a decent and fair Slovakia. That demand still holds true even today".

She noted that these two young people were killed because Kuciak was dedicated to exposing corruption and abuses of power. According to the president, the country has lately been experiencing an increased wave of hatred, anger and verbal attacks.

"In the case of Jan and Martina, the assault was also preceded by threats. We have to stop this before it's too late, or the legacy of Jan and Martina will be in vain," she stressed, according to the news agency.

The opposition Smer-SD party chair Robert Fico, who served as the prime minister back in 2018, said that these murders were politically misused. "Only journalists and government politicians know [who was behind the murders], repeating their lies about the responsibility of my government," he said.

"Let the anniversary of the murders of the journalist and his girlfriend be a reminder of the abuse used by journalism to fight the current opposition, a reminder of the total disgrace of journalism and proof that journalists and media owners are responsible for the condition in which Slovakia finds itself in 2022," he was quoted by TASR as saying.

Smer-SD lost its dominant position after Kuciak´s murder; however, it has managed to grow strong and gain public support again since autumn 2021. Together with Voice-SD of former PM, Peter Pellegrini who replaced Fico after Kuciak was murdered, they have been leading the recent public polls.

According to a poll carried out by AKO agency for TV JOJ, had a general election taken place in February this year, Voice-SD would have won with 17.5% of the votes, followed by Smer-SD party with 14.5% and the junior government party Freedom and Solidarity (SaS) party with 14.2%.

Extra parliamentary party Progressive Slovakia would have gained 8.7%, the senior government party OLaNO 8%, the extra parliamentary Christian Democratic Movement (KDH) would have received 7.2% and the co-governing We Are Family party and the far-right Republic party both 6.9%.

The fourth coalition partner For the People, as well as far-right LSNS (People’s Party Our Slovakia) which are also sitting in parliament, wouldn’t have reached the 5% threshold. For the People would have gained 2.3% of votes and LSNS 2.5%.