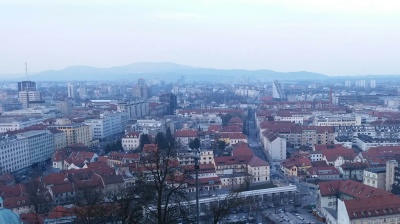 The epidemiological situation in Slovenia related to COVID-19 was among the worst in the euro area in the fourth quarter of 2020 and required a tightening of restrictive measures, which led to another severe drop in economic activity, the Bank of Slovenia said on January 12.

According to statistics office data, Slovenia’s economy contracted by an annual 2.6% in the third quarter of 2020, easing significantly from the 13% y/y decline in the previous quarter, when the country experienced the peak of the coronavirus crisis.

During the second wave of the coronacrisis Slovenia’s service sector was particularly hard hit, unlike in the first wave, when the industrial sector recorded a sharp decline.

Domestic private consumption fell sharply, but there were more favourable conditions in construction and industry, making the shock in economic activity not as strong as in the first wave, the Bank of Slovenia said.

The situation on the labour market in Slovenia remained better than the euro area average, but is deteriorating due to the new wave of the epidemic.

The jobless rate has been steadily rising since mid-November. The beginning of the second wave of the epidemic had no negative consequences for the Slovenian export sector, with the exception of tourism.

Balance of payments data show merchandise exports dropped by only 2.6% year on year in October. The first estimates for November are also encouraging. Due to a new shock in trade in travel, total exports and imports of services plunged by 18.6% and 16% y/y respectively in October, according to the central bank.

Slovenia's government debt stood at 78.5% of GDP at the end of September. With additional borrowing, mostly in October with the issuance of a 30-year bond, the debt will exceed 80% of GDP at the end of the year and then only gradually decline, while still remaining much lower than the euro area average.

Polish industrial production jumps 18.9% y/y off low base and returning demand
9 hours ago
Czechia and Slovakia recorded the highest excess mortality rates in the EU in February
1 day ago
Polish PPI expansion picks up to 3.9% y/y in March
1 day ago
Moldova’s currency falls amid weak exports, no grants
2 days ago
Romania’s Chimcomplex shares soar by 29% on WSE listing news
3 days ago