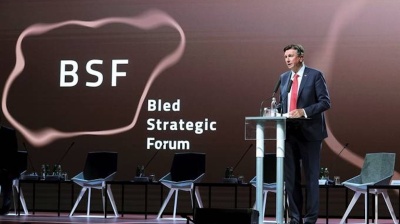 The start of EU negotiations with Albania and North Macedonia should be a priority for the EU, Slovenian President Borut Pahor said on September 1, the first day of the Bled Strategic Forum (BSF).

Both countries have been EU accession candidate countries for years, but have repeatedly failed to get backing from EU members to move forward to accession talks.

“At the moment, there is an acute stalemate over the resumption of negotiations with North Macedonia and Albania. The problem is no longer just a political one, but it has become a moral problem of the EU. What has North Macedonia done for its European perspective? Everything and more than that. And what did she get? Nothing,” Pahor said.

Pahor argued that the credibility of the EU is being put to a “terrible test”.

The process of enlargement stalled after Bulgaria blocked the start of EU accession talks with Skopje at the end of 2020 due to historical and language issues. This also blocked Albania's start of EU negotiations because so far the two neighbouring countries have been coupled in the process.

“The Western Balkans region needs to do more on its own to become attractive. In this sense, I have been supporting the Open Balkan initiative since its beginning in 2019,” Pahor said, adding that he does not see it as an alternative to the EU, but as a parallel process.

“The Open Balkan initiative has great potential to stimulate the processes of mutual economic and political cooperation between the countries in the region, which will make it more developed and more attractive for the EU enlargement,” Pahor said.

According to the Slovenian president, the EU should keep enlargement to the Western Balkans among its policy priorities, but the countries of the region should show more will to adapt to the acquis and promote the EU fundamental values.

He said that slowing down the enlargement process has several negative effects, both for the EU and for the Western Balkans, such as weakening of mutual trust, slowing down the reform process, rising nationalisms and opening up space for the influence of third countries.

Slovenian Prime Minister Janez Jansa also said that EU enlargement is one of the priorities of the Slovenian Presidency, which is why the October summit on the Western Balkans for European leaders will take place in Slovenia.

Serbia and Montenegro have already started the EU negotiations, while Bosnia & Herzegovina and Kosovo are potential candidate countries.

The topics discussed on the first day of the Bled Forum also included post-COVID-19 recovery, as well as green and digital transformation.

The Bled Strategic Forum is a two-day conference, traditionally held in the Slovenian mountain lake resort of Bled, with this year’s focus on the future of Europe. The forum is being attended by senior EU officials, but also leaders from the Western Balkans countries.