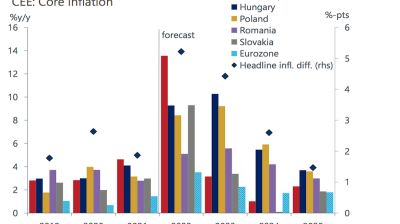 Wage growth in the Visegrad Four countries of Central Europe plus Romania is outpacing the Eurozone as well as Emerging Markets more widely, but the risk of wage-price inflationary spirals is “overblown”, argues economic consultancy Oxford Economics in a briefing note published on September 5.

Wage growth has been stimulated by the way the recovery from the worst of the pandemic has affected already tight labour markets in the region. This has fed through into inflation and raised inflationary expectations.

Now international price pressure from soaring food prices and energy costs are eroding real wages, leading to more pressure for wage rises. In July inflation was 17.5% in Czechia,  and just below 15% in Romania. In a flash reading, inflation was 16.1% in Poland in August. Hungarian inflation was 11.7% in June, while Slovakia's was 13.2%.

Oxford Economics points out that usually high inflation in the region leads to a decline in real wages because of the weakness of trade unions. The current tight labour market is strengthening the position of workers but they have been unable to keep wages level with the rising cost of living in Poland, Czechia, Slovakia and Romania. So far there have been few strikes but some trade union leaders and political observers are predicting a hot autumn.

In Hungary wages are still growing in real terms but ING bank predicted in a research note last month that they could soon turn negative. “The real wage growth has remained in the positive territory but dropped to only 3.3% year-on-year by June. With the further strong rise in inflation in July and in the coming months, real wage growth could turn into negative territory, dragging on consumption during the second half of 2022,” predicted Peter Virovacz,  ING’s senior economist in Hungary.

In Poland, wages rose 11.8% y/y in Q2 compared to 13.9% inflation, the first time in a decade when wage growth trailed the inflation rate.

Czech wages grew 4.4% in nominal terms in the second quarter but fell 9.8% in real terms, the country’s statistical office reported on September 6.

Oxford Economics says that earnings growth will remain elevated, keeping core inflation higher for longer, but the coming slowdown in the European economy should take some pressure off.

However, it argues that nominal wage growth in Poland and Hungary could stay strong, which could keep inflation there higher for longer. This would keep their assets under pressure and force central banks to maintain a tight stance, or risk a weakening of the zloty and the forint or damage to economic competitiveness, hurting medium-term growth prospects. It says their central banks are currently "struggling to re-anchor inflationary expectations”.

“Even without an expectations-based wage-price spiral, the risk of nominal wage growth staying elevated is material, especially in Poland and Hungary, where the breadth of wage pressure and scale of inflation expectations are higher. That is likely to keep core price pressures higher for longer, pressuring the zloty and forint. But if currencies do not weaken in line, the export-reliant CEE economies might see some of the cost competitiveness evaporate, weighing on the growth outlook,” Oxford Economics said.