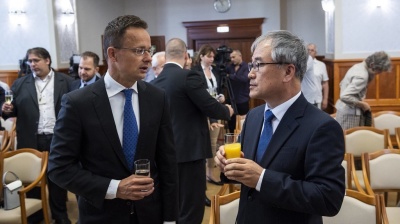 South Korea's Inzi Controls is investing HUF14.8bn (€45.8mn) in building a battery plant for electric vehicles in Komarom near the Slovakian border, it was announced on July 1.

The government is providing HUF1.63bn funding for the project as the plant will create 122 workplaces, Minister of Foreign Affairs and Trade Peter Szijjarto said on Monday. Hungary has won yet another investment amidst stiff competition, bringing it one step closer to an annual HUF10 trillion in automotive industry production, he added.

Inzi Controls supplies parts to Audi, Volkswagen and Continental among others and is the technological partner of Bosch.

Inzi Controls would be the fourth Asian manufacturer to set a production base in Hungary following the footsteps of SK Innovation, Samsung SDI and GS Yuasa.

SK Innovation will invest HUF239bn in a second a battery plant in Komarom as it plans to step up production. The company began production of lithium batteries for electric vehicles last year following a HUF98bn investment.

The annual production of the new plants combined could reach 7.5 Gwh, equal to provide batteries for 200-250,000 zero emission cars.

Since 2018, Samsung SDI has shipped the largest European car manufacturers from its plant near Budapest set up from HUF100bn. In the next two years, the South Korean company is planning an additional €1.3bn investment, after which capacity will reach 15 GWh and the number of employees will be 1,500. Japanese company GS Yuasa is also in the midst of building its first European factory in the industrial park of Miskolc in northeast Hungary.

The emergence of Asian battery manufacturers in the region is not a coincidence, as European car manufacturers are planning expand or replace their existing model portfolio with new fully electric or hybrid models.

Carmakers mostly bought the most important parts of the drive chain, the battery, from China and South Korea.