Stranded migrants clash with Polish soldiers on border with Belarus 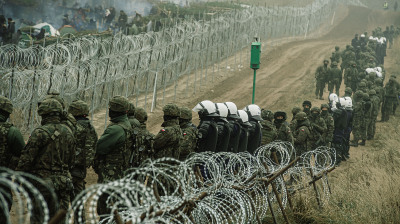 Polish soldiers man the border with Belarus.
By Wojciech Kosc in Warsaw November 17, 2021

Migrants stranded between Belarusian border guards and Poland’s border fence guarded by military and police began rioting on November 16 in what Polish authorities described as an “attack on Poland”.

The unrest began in the morning with migrants throwing pieces of concrete, bottles and wood logs at the Polish forces. Polish authorities claimed that Belarusians encouraged and facilitated the attack by handing the migrants stun grenades.

By the middle of the day the situation escalated with the Polish riot police bringing in four trucks mounted with water cannons which started spraying the crowd of mostly young men that were running up the fence and pelting the police and soldiers with stones.

Some sections of the fence were broken down and the migrants attempted to get through the fence only to be met with a barrage of water from the water cannons.

As the situation became more chaotic the Polish police began using tear gas and stun grenades to push the migrants back.

A reporter on the front line reported that the air was thick with teargas and the sound of stun grenades were constantly exploding in the background.

After about an hour of fighting the migrants retreated and the clash died down with the refugees retreating from the fence. A soldier and a Border Guard officer were injured by the attackers, Poland said.

With snow likely to start falling soon and the temperature already falling to below zero at night, humanitarian aid workers worry that migrants soaked by the water cannons during the clash run the risk of dying from hypothermia during the night.

Over a thousand migrants, including women and children, are stuck in the freezing conditions between the Polish and Belarusian borders at the currently closed Bruzgi-Kuznica border crossing, where they are trying to cross into the EU.

Starting in August, Belarus has allowed thousands of migrants to reach the border with Poland in revenge for a string of EU’s sanctions imposed after last year’s presidential election rigged by the Belarusian strongman Belarus' president Alexander Lukashenko led to mass protests and a brutal crackdown.

The situation was exacerbated after a commercial Ryanair flight was forced to land in Minsk and a top opposition blogger Roman Protasevich and his girlfriend were arrested on May 23.

Poland says the influx of migrants at the 180km land border with Belarus is “hybrid war” aimed at sowing chaos in Poland and EU.

The direct media coverage of the unrest comes from the Belarusian side of the border and largely from Russian outlets, as Minsk has given them access. Belarus also let in reporters from major news outlets like CNN or the BBC.

There is very little reporting from the Polish side as the authorities have cordoned off a militarised zone and banned local and international media from access. A crew of journalists from the Russia government-financed broadcaster RT France were arrested on November 15 and taken away in handcuffs when they tried to get through the cordon closer to the action.

Poland declared a state of emergency in early September, which empowers it to impose a media blackout.

Poland’s Defence Minister Mariusz Blaszczak thanked the soldiers for “stopping today's assault. Thanks to you, Poland is still safe. All soldiers currently serving on the border will receive special financial bonuses.”

Meanwhile, intense diplomacy has been underway this week by France, Germany, Belarus, and Russia – but not Poland – to reduce tension.

French President Emmanuel Macron and Russian President Vladimir Putin agreed to work together to de-escalate the crisis, the Elysee said in a statement on November 16.

Putin took a swipe at Poland by emphasising, “the extremely rough treatment of refugees by Polish border guards,” the Kremlin said in its communiqué.

“We have reached common ground that no one needs escalation – neither the European Union, nor Belarus. We cannot allow things to escalate into a military confrontation, no matter how much someone may want it,” Lukashenko said as cited by BelTA.

There was no statement about the conversation by Merkel’s office.