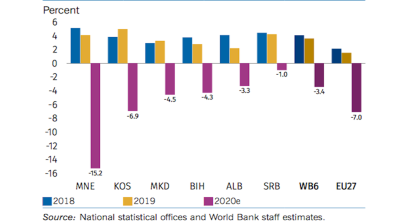 The six Western Balkans countries can expect only moderate growth between 2021 and 2023 as the damage caused by coronavirus (COVID-19) pandemic will continue to depress investments and employment, a World Bank report warned.

The development bank forecasts a rebound of 4.4% in 2021 after the pandemic caused a contraction of 3.4% last year for the region as a whole — though the depth of the contraction varied widely between countries, ranging from -15.2% in Montenegro to just -1.0% in Serbia. Growth is then expected to slow to 3.7% in 2022 and 2023 as the region makes a gradual recovery, says the report “Western Balkans: Regular Economic Report No.19: Subdued Recovery”.

The World Bank points to the continued impact of the deep economic shock last year on labour markets, and argued that the fall in the official unemployment rate in 2020 was mainly due to people dropping out of the job market altogether. Job losses across the region amounted to almost 70,000 by the end of 2020, and disproportionately affected women and young people. Meanwhile, between 165,000 and 336,000 people were pushed into poverty, although stimulus and job retention programmes launched by government helped avert a worse human crisis. Serbia in particular entered the coronacrisis in a strong fiscal position that allowed it to implement a large support programme.

“The pandemic halted a decade of progress in boosting incomes and reducing poverty in the countries of the region and labor markets in the Western Balkans have recovered just half of their pandemic losses – leaving large numbers of people unemployed and forcing many others to drop out of the labour market all together,” it said.

“We are certainly seeing some positive trends around the region, boosted by swift action taken by many countries to contain the worst impacts of the pandemic, but the health and economic devastation of the pandemic will continue to have an impact, ” said Linda Van Gelder, World Bank regional director for the Western Balkans, in a statement.

“The introduction of vaccines, coupled with improvements in confidence, consumption, and trade, will also help keep this momentum going, but countries must remain vigilant in their efforts to introduce and reinforce policies that can lead to growth, protect health outcomes, and boost human capital.”

Despite the forecast recoveries, according to the World Bank there remain downside risks that could still derail the regional economy, among them a worsening of the pandemic and further delays in vaccine deployment.

There are also new economic risks. Montenegro and Albania in particular have seen their debt increase as revenues fell and spending rose to cover the health and economic crises.

“As recovery takes hold, throughout the region rebuilding  fiscal sustainability will be a high priority. Falling revenues and rising spending needs together have strained fiscal balances. In 2020 all Western Balkan countries authorised massive economic packages; as a result, deficits in all six countries deteriorated drastically,” according to the report.

“Throughout the region, tighter fiscal policy and vigilant debt management is central to ensuring committed — and ultimately accelerated — debt reduction once the health and economic crises caused by the pandemic are brought under control.

Deficits stood at 6-8% of GDP in most of the region but reached as much as 11% in Montenegro, and will remain relatively high in 2021. Public and publicly guaranteed debt is forecast to reach 64.7% of GDP in North Macedonia, 77.3% in Albania and as high as 93.8% in Montenegro.

While the region’s banking systems are generally well capitalised, “a protracted pandemic could draw out recovery enough to erode bank buffers”, says the World Bank.

“Moreover, if policy support is withdrawn before the recovery takes firm root, bankruptcies of illiquid but still viable firms could mount, leading to further losses of jobs and income. Widespread social discontent and political instability could also complicate any resurgence in economic activity,” says the report.

Country specific factors are also important. For example, the World Bank stressed the importance of reforms in Bosnia & Herzegovina to address entrenched structural and institutional problems and unleash the potential of the private sector.

On the other hand, improved pandemic management in the region or a speedy recovery of EU economies would lead to accelerated growth in the Western Balkans.

Ukraine's international reserves increased to $28bn as of the start of May
44 minutes ago
Ukraine’s consumer price inflation slowed to 8.4% in April
52 minutes ago
Romania’s retail sales up 4.1% y/y in Q1
3 days ago
ING: Inflation pressure continues to build in Poland
3 days ago
Russians Services PMI remains a strong 55.2 in April but slowed a little from March, optimism for the rest of the year high
4 days ago