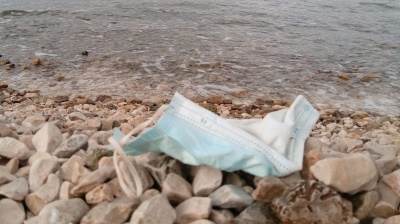 A discarded mask on a beach in Zadar, Croatia.
By Clare Nuttall in Zadar Croatia October 25, 2021

There has been a sudden spike in coronavirus (COVID-19) infections in Croatia and Slovenia in recent days. The number of new daily cases topped 3,500 in Croatia, which has a population of just over 4mn, and 1,500 in Slovenia, population 2mn.

The sharp increase in infections comes despite higher vaccination rates in the two countries than other Southeast European states – the populations of fellow EU members Bulgaria and Romania are the least vaccinated in the bloc and both countries are suffering a devastating new wave of the pandemic. In both Croatia and Slovenia, new cases are still below the highs recorded in the autumn 2020 wave of the pandemic.

In Croatia, Health Minister Vili Beros announced at the government session last week that cases were up by 56% compared to a week earlier. As of October 20, 939 people were hospitalised, another sharp increase, including 131 on respirators.

"The increase in the number of new infections by 56% compared to last Wednesday calls for additional, much-needed dose of caution,” said Beros, according to a government statement. 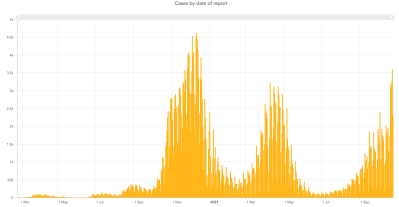 The health minister also pointed out that 70.8% of the patients in hospital were either not vaccinated or had received only a single dose. The same was true of 86% of those on respirators.

Currently, 55.38% of Croatia’s adult population have been vaccinated, including 73% of health professionals.

The main social measure to contain the virus in Croatia is a requirement to wear face masks in public indoor spaces such as shops, museums and public transport. Other requirements include a limit on gatherings of up to 100 people.

While the rules are clear, compliance and enforcement are mixed. In several Croatian cities and on intercity trains and bus transport, bne IntelliNews observed some people wearing masks correctly, some went maskless, while others wore their masks at half mast with noses uncovered or tucked under their chins. It was a similar situation in shops, bars and restaurants.

Prime Minister Andrej Plenković warned on October 21 about the growing number of new coronavirus cases, and urged people to get vaccinated and comply with epidemiological measures.

"We must comply with the basic protection measures – wearing a face mask, keeping a distance, airing the premises and maintaining hand hygiene," Plenković told a cabinet meeting, a government statement said.

In response to the sharp rise in new cases, on October 24 Germany declared both Croatia and Bulgaria high-risk areas for coronavirus, meaning unvaccinated travellers from the two countries have to self-isolate.

In Slovenia, the number of new cases reached a nine-month high at the weekend, despite a 53% vaccination rate. 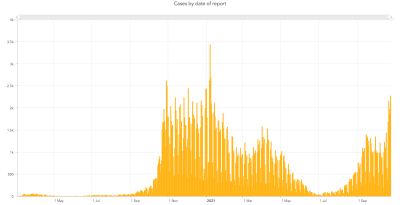 Government efforts to force more people to get vaccinated by requiring COVID green passes to access private service facilities and for public sector employees have sparked a backlash with several protests in recent weeks.

At the end of September, around 10,000 people gathered in the capital Ljubljana. Police officers disbanded the protest by using water cannon and tear gas after some of the protesters threw bottles and other objects at the police officers. Prime Minister Janez Jansa has since blamed the latest wave of the pandemic in the country on anti-vaxxers.

Kremlin says talks have begun with the US over Ukraine crisis, but no breakthroughs achieved
2 hours ago
In first ICJ rulings, Armenia largely comes out on top of Azerbaijan
2 hours ago
Romania’s ruling coalition divided over “solidarity tax” for large companies
2 hours ago
Corruption scandal brings down senior Fidesz politician
2 hours ago
Putin-Biden summit fails to resolve the Ukraine military build-up crisis
10 hours ago