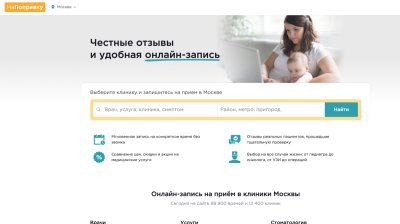 Russian startup NaPopravku (“for cure”), an online service for medical appointments, has raised $2.25mn for expansion
By EWDN in Moscow September 24, 2020

The investor pool includes the Russian investment holding Avenir, which has a variety of tech companies in its portfolio; the Swedish VC fund VNV, which is renowned for its successful investments in Avito and Busfor; and Malaysian businessman Mark Chang Mun Kee, who founded MOL AccessPortal and JobStreet.com.

Founded in 2014, NaPopravku currently serves 14 Russian cities, providing access to nearly 89,000 physicians and 12,400 clinics. According to Rusven, the company raised $300,000 from undisclosed investors in 2015; then RUB50mn in 2016 (around $750,000 at the exchange rate of that time) from Avenir’s founder Boris Zhilin. The latest round was closed last month, but was reported just days ago.

The Russian media also reported that Donut Lab, a California-based game publisher with Russian and US co-founders, secured $1.6mn from French fund Level Up and other unnamed investors.

Launched in 2018, the company was previously funded by Wargaming, Starta Ventures, venture capitalist Sergey Kovalenko and other unnamed business angels. Among Donut Lab’s most famous games is ‘Kids vs. Zombies’, which depicts an apocalypse where “all adults became zombies” and “only a secret donut ingredient can save humans.”