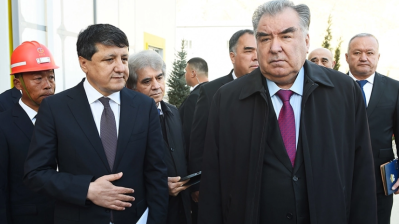 He dreamed of providing all of Tajikistan with natural, preservative-free juices. Juice, Yunoev said, solved a problem: By his own calculations, about 60 tonnes of apples spoil every year in the valleys around Roshtkala and Khorog, the GBAO capital.

Working with only a hand-press, he dreamed of earning enough to buy his fledgling firm, Sharbati Pomir (Pamir Juice), automated machines to turn more of those apples into juice.

But Yunoev could not participate in a government-organised forum connecting entrepreneurs with foreign investors this week: Pamir Invest-2022 on August 17 and 18 in Khorog. He was arrested two months ago on suspicion of membership in a banned organisation. He faces up to 12 years in prison.

After unrest in May left dozens dead, most apparently at the hands of government forces, authorities unleashed a dragnet, arresting hundreds of community leaders, cultural figures and activists – and sometimes their family members.

The government’s accusations are difficult to take at face value. Perfunctory trials are conducted away from public scrutiny. The accused often lack access to defence attorneys.

Around 300 Pamiris have been arrested since November, when GBAO saw the revival of protest moods among autonomy-minded residents of the region. Many have faced charges ranging from extremism to terrorism and seeking to overthrow the government through violence and membership in radical groups.

Arrests and disappearances continue almost daily and are often carried out by Dushanbe’s partners in the Russian security services.

On August 17, for example, activist Maksud Gayosov, who left Khorog after the November protests, was detained in Moscow, Radio Ozodi reported. Relatives expect that the Russian authorities will soon extradite him to Tajikistan, as they have many others. Gayosov is well-known for his efforts during the pandemic to raise money to help the sick.

In this oppressive atmosphere, some found it jarring to see Khorog, the epicentre of the violence, host a forum with international visitors including the ambassadors of the United States and European Union.

Organised by the State Committee on Investments and State Property Management, the Pamir Invest forum was first held in 2011. The annual event is designed to drum up business in the GBAO, an impoverished region even by Tajik standards that sits on the only road connecting Dushanbe and the country’s largest investor, China.

This year was the first time the forum was celebrated on such a large scale and with international bigwigs in attendance.

Along with the government’s sticks – the killings and arrests – the forum is a carrot, part of a package of promises the government says will create jobs and attract investment into the long-neglected area. The GBAO government reported that within the framework of the forum, contracts worth one billion somoni ($100mn) were signed, though details were scarce.

Deputy Minister of Labor and Social Protection Imomnazar Imomzoda was quoted in state media as describing the forum as aimed at creating local jobs. He said a shoe manufacturing plant will open soon.

This sudden top-down effort to soothe tempers is being stage managed by a man close to Tajikistan’s autocratic leader: Sherali Kabir, a GBAO native, who rose up through the ranks of management at the Talco aluminium plant, the largest industrial concern in Tajikistan and a cash cow for the president’s family. As chairman of the board of directors, he was considered the right-hand man of Hasan Asadullozoda, the president’s brother-in-law.

In 2020, Rahmon made Kabir minister of industry and innovative technologies; this summer he charged him with overseeing GBAO’s development.

Kabir has a proven record opening businesses in GBAO – indeed, he has created enough jobs in his native Darvoz that visitors notice far more local men about, as compared to the rest of Tajikistan where roughly half of working-age males are abroad.

But like his work at Talco, the new concerns are shrouded in secrecy. He often appears alongside the president at events with Chinese investors.

If Kabir is emerging as a winner from the unrest, the losers are also becoming clear.

This summer, the government has methodically squeezed entities controlled by the Aga Khan, the Europe-based philanthropist deemed by the Shia Ismailis of the country’s eastern Pamirs region to be a spiritual leader.

Last week, the authorities nationalised the Khorog Park, which was founded and controlled by the Aga Khan Foundation.

Sharofat Mamadambarova, the former head of a national group representing Tajik Ismailis and a long-time leader with the Aga Khan Foundation, told Radio Ozodi in an interview that she had been interrogated by the State Committee for National Security on August 13-14. The KGB successor agency was seeking information about the Aga Khan Foundation’s activities in the country, she said.

The Aga Khan Foundation runs a school and a university in Khorog and supports classes in Dushanbe. The group’s summer camp was cancelled this year. Parents and students are anxiously waiting to see if the schools will reopen in September.