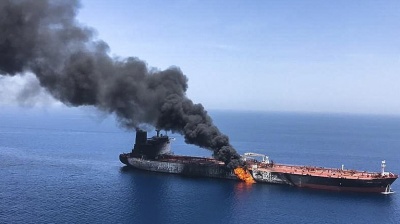 The Front Altair on fire in the Gulf of Oman.
By bne IntelliNews June 13, 2019

Ascertaining whether a state actor was behind attacks on two oil tankers in the Gulf of Oman on June 13 and the attacks on four tankers not far from the same spot on the map a month ago is now the urgent priority for governments anxious to prevent an outbreak of hostilities between Iran and its foes.

Late on June 13, without proffering hard evidence, US Secretary of State Mike Pompeo said Washington had made up its mind tht Iran was responsible, telling a press briefing: “It is the assessment of the United States government that the Islamic Republic of Iran is responsible for the attacks that occurred in the Gulf of Oman today. This assessment is based on intelligence, the weapons used, the level of expertise needed to execute the operation, recent similar Iranian attacks on shipping, and the fact that no proxy group operating in the area has the resources and proficiency to act with such a high degree of sophistication.”

The latest incidents, which left the Norwegian-owned Front Altair and the Japanese-owned Kokuka Courageous seriously damaged, sent Brent crude up by almost 4.5% to almost $62.64 per barrel and Reuters reported ship brokers as saying that two oil tanker owners, DHT Holdings and Heidmar, had suspended new bookings to the Mid-East Gulf. The Gulf of Oman opens out into the Indian Ocean but before that tankers must negotiate the Strait of Hormuz, through which at least a fifth of the oil exported worldwide passes. Iranian hardliners have previously warned Iran would blockade the strategic ‘chokepoint’ to energy exports if the US did not relent on its policy of attempting to force all Iranian oil shipments off the world market, but, despite Pompeo's statement, that does not mean that all the finger-pointing for the tanker attacks is being aimed at Iran.

As Iranian officials have warned, there are foreign policy hawks in the US, Israel and Saudi Arabia who would be only too pleased to see a chain of events provoke military action against Tehran in their bid to reshape the Iranians’ influence in Middle East affairs.

Zarif pointed out that the incidents took place while Japanese PM Shinzo Abe was meeting Iran’s supreme leader, Ayatollah Ali Khamenei, “for extensive and friendly talks”, with Abe having been encouraged by US President Donald Trump to talk to the Iranians over the nuclear deal stalemate between Iran and the US. Since Abe’s arrival in Tehran on June 12, the Japanese have emphasised that they were not bringing specific messages from Trump, and have said nothing they heard in the first day of talks implied a breakthrough was imminent.

Stepping up Iran’s denials of involvment in the tanker attacks, an Iranian official reportedly told the BBC: "Iran has no connection with the incident. Somebody is trying to destabilise relations between Iran and the international community."

Iranian President Hassan Rouhani subseqently appeared on state TV, saying: “Security is of high importance to Iran in the sensitive region of the Persian Gulf, in the Middle East, in Asia and in the whole world. We have always tried to secure peace and stability in the region.”

No message for Trump
Iran, plunged into a painful recession and according to some reports nearing insolvency in the face of the toughest US sanctions it has ever endured, says the US has mounted an “economic war” against it. Officials have made it clear the US would have to call off that “war” before nuclear deal talks could even be countenanced and Iranian media on June 13 quoted Khamenei as saying during talks with Abe that he did not see Trump as being worthy of any exchange of messages. Any trust in the US was lost when it unilaterally walked out of the multilateral nuclear pact, he made clear.

Front Altair was carrying 75,000 tonnes of naphtha, a petrochemical feedstock. It was “suspected [that it was] hit by a torpedo”, Wu I-Fang from Taiwan’s state oil refiner CPC, which chartered the vessel, said, although later in the day Reuters quoted sources as saying torpedoes were not used against the ships.

The Kokuka Courageous, carrying methanol, was damaged in a “suspected attack” that breached its hull above the waterline. It was en route from Saudi Arabia to Singapore, Bernhard Schulte Shipmanagement said.

Iranian state TV reported 44 crew had been evacuated from the tankers to the Iranian port of Jask, although the Bahrain-based US Fifth Fleet said it had rescued some crew members and taken them to Oman.

UAE inquiry
The UAE launched an inquiry into the tanker attacks that took place during the early hours of May 12. It found that the sophisticated limpet mines used in those attacks were of a type used by state-like actors, but the inquiry conclusions stopped short of blaming Iran or any other state as the culprit. National security advisor to Trump and foreign policy hawk John Bolton—who while still a private citizen many times advocated the merits of attacking the Islamic Republic to force regime change and who has backed some highly dubious Iranian opposition groups in exile—claimed Iran was almost certainly involved in the attacks. There were suggestions the US would present evidence to the UN to that effect, but that has not happened.

Cailin Birch, global economist at The Economist Intelligence Unit, said in remarks on the attacks: “It remains unclear who the actors are behind the recent spate of tanker attacks in the Gulf of Oman. Iranian authorities will continue to deny responsibility, either directly or indirectly through proxies. Houthi rebels fighting Saudi forces in Yemen are also suspected of being behind the attacks.

“Given the lack of clear information, there is a risk that the US government will interpret the recent attacks as a potential sign of Iranian aggression in the region; the national security advisor, John Bolton, indicated as much after the attacks that occurred last month.

“US-Iran tensions are already running high as Iran’s deadline to stop complying with some aspects of its nuclear agreement, unless European countries help it to maintain exports, approaches in the next 30 days.”

Another theory for the attacks is that they were undertaken by Houthi rebels fighting the Saudi-led efforts to oust them from Yemen. The Houthis are backed by Iran. On June 12, the Saudi Gazette ran a headline stating “Iran hand behind Abha attack” after a missile attack on Abha airport in Saudi Arabia that reportedly injured 26 people.

“The continuation of the Iranian regime’s aggression and reckless escalation, whether directly or through its militias, will result in grave consequences,” Saudi Arabia’s deputy defence minister, Prince Khalid bin Salman, said in a statement following the Abha attack.

Iran denies providing anything more than moral support to the Houthis.