Tehran grinds to a halt as winter smog sets in 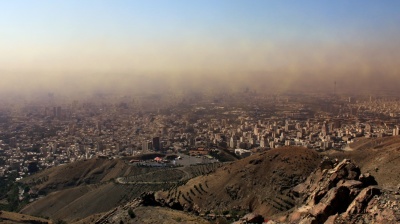 In the past 24 hours alone, the winter smog has reportedly sent 2,863 people with suspected heart and lung conditions to accident and emergency departments, ISNA said.

The majority of kindergartens and elementary schools in the southern and central areas of the Iranian capital have reportedly been shut down on official orders until the pollution, seen as a particular threat to children, pregnant women and the elderly, subsides.

According to Iranian law, whenever the average air pollution index reaches 133, the government must be notified by city officials so that schools can be shut and vulnerable groups warned. The acceptable index level in most cities is under 50.

Index readings as high as 169 have been recorded in Tehran’s Grand Bazaar area and southern workshop districts in the latest pollution outbreak.

The areas of the capital with the best air quality remain the northern hilly districts—which boast the priciest property in the city—while the eastern Tehranpars area also does well. It is scoring under 100 on the index.

Tehran Mayor Pirouz Hanachi said that, apart from waiting for it to rain to cleanse the air, car users should stop using their vehicles until the pollution subsides.

Hanachi said that 80% of the air-borne pollutants in Iran stem from vehicles.

"[As this is the case] we decided to reduce public transport costs by 50% and increase the cost of entering the congestion zone," he said. “We also have restrictions on heavy-duty vehicles. Citizens should also make less personal car journeys with a single occupant,” he added.

The US and Iran appear to have edged closer to an agreement that would see a revival of the 2015 nuclear deal. Indirect talks in Vienna last week—in which European diplomats shuttled between the ... more

Europeans shuttle between US, Iran delegations in Vienna effort to rerail nuclear deal

Officials from the UK, France and Germany are shuttling between two hotels in Vienna, serving as intermediaries between a US delegation and an Iranian delegation who are de facto in indirect ... more

The Biden administration has reportedly warned Beijing that it will enforce Trump-era sanctions against Iranian crude oil exports as shipments from Iran to China have leapt. As ... more