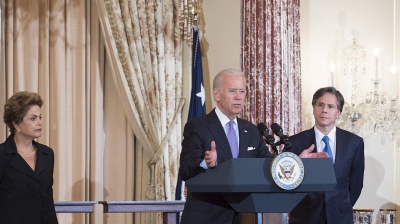 Tony Blinken (r), listens to Joe Biden, whom he has been tapped to serve as US secretary of state. Blinken is a clear enthusiast for the nuclear deal with Iran.
By bne IntelIiNews November 24, 2020

Some foreign companies have made initial contacts with Tehran to explore how they might return to Iran if US sanctions on the country are lifted by Joe Biden when he becomes US president in January, Iranian government spokesman Ali Rabiei said on November 24.

Major foreign companies exited Iran after US President Donald Trump in May 2018 unilaterally pulled Washington out of the 2015 nuclear deal with six world powers and restored economic sanctions, while warning that those who chose to keep doing business with the Iranians that they might be exposed to secondary sanctions. Rabiei said Iranian officials expected such companies to return provided Biden lifts the sanctions.

“Recently, contacts about opening offices and the presence of foreign companies in Iran have increased,” Rabiei told a news conference streamed live on a government website, as reported by Reuters.

He also said that companies that did not leave Iran despite the sanctions could be given more opportunities in the future, but did not name any of the firms.

“Some are considering reopening offices, but some companies... never closed down completely. These companies will definitely have more opportunities to operate,” Rabiei said.

“...Certainly, with the... lifting of the oppressive sanctions and the absence of Trump, the presence of foreign companies and a willingness to invest in Iran will increase,” he added.

Biden has pledged to rejoin the nuclear deal, agreed by Washington when he was vice president, if Iran returns to strict compliance with it. But diplomats and analysts have cautioned that this would be unlikely to happen overnight as both sides might push for additional commitments and there is also the possible prospect of Iran demanding compensation for the economic damage it has suffered under the Trump sanctions.

Tony Blinken, on November 23 nominated by Biden to serve as his secretary of state in his administration, set to commence on January 20, is an outspoken proponent of the nuclear deal.

Speaking to the Aspen Institute earlier this year, Blinken said Biden would recommit to the deal, also known as the Joint Comprehensive Plan of Action (JCPOA), and deploy diplomacy to address the broader issues with Iran.

"[Biden] would seek to build on the nuclear deal to make it longer and stronger if Iran returns to strict compliance," Blinken said.

"And then we would be in a position to use our renewed commitment to diplomacy to work with our allies to strengthen and lengthen it, but also we'd be in a much better position to effectively push back against Iran's destabilising activities."

Further criticising Trump’s decision to unilaterally exit the JCPOA in favour of using “maximum pressure” sanctions in an attempt at securing big concessions from Tehran on its nuclear and ballistic missile development programmes and roles in Middle East Affairs, Blinken said: "The bottom line, by walking away from diplomacy, by acting erratically, President Trump has made conflict more likely, and the nuclear programme is actually now advancing instead of being stopped."

In 2018, according to Middle East Eye, Blinken berated the Trump administration for nixing US participation in the JCPOA, saying that withdrawal from the pact put Washington on a "collision course" not only with Iran but also with its own allies.

"It gives Iranian hardliners the excuse to speed again toward the bomb without a united international coalition to oppose them or inspectors to expose them," Blinken said.

"Or if Iran and Europe stick with the deal it forces us to sanction the latter to stop them from doing business with the former. Either way we lose."

During the Barack Obama years, Blinken, seen as an establishment centrist, served in key positions including national security adviser to then-vice president Biden, deputy national security adviser and deputy secretary of state. Blinken was also part of the Obama team that brokered the nuclear deal which saw Iran scale back its nuclear programme in exchange for the lifting of sanctions against its economy.

Despite the likelihood of Blinken being an enthusiast for a US return to the nuclear deal, he has also signalled that he is more clear-eyed on Middle East policy than progressive activists in the Democratic Party. In October, Blinken told the Jewish Insider that even if the Biden administration suspended the nuclear-related sanctions on Iran, “we will continue non-nuclear sanctions as a strong hedge against Iranian misbehavior in other areas”. That might mean Iran would still be under considerable financial pressure given that the Trump administration has ramped up sanctions on Iran for its alleged support of terrorism.

As regards Iran’s regional arch rival Saudi Arabia, Blinken is on record as saying: "We would review the US relationship with the government of Saudi Arabia, to which President Trump has basically given a blank check to pursue a disastrous set of policies, including the war in Yemen, but also the murder of [dissident journalist] Jamal Khashoggi [and] the crackdown on dissent at home.”