Temperatures in Russia’s Arctic Circle rocketed to over 45C in the coldest town on earth, breaking all previous records on June 19 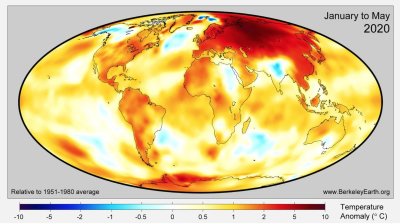 Temperatures have soared to over 45C in Russia's Arctic Circle – the hottest on record – in a region that is normally covered with snow as the Climate Crisis arrives in Siberia and is already starting to destroy Russia's energy infrastructure
By Ben Aris in Berlin June 23, 2020

This summer has turned into the hottest since record-keeping began, as towns that are usually still blanketed by snow are experiencing a blazing heatwave, thanks to the escalating climate crisis. 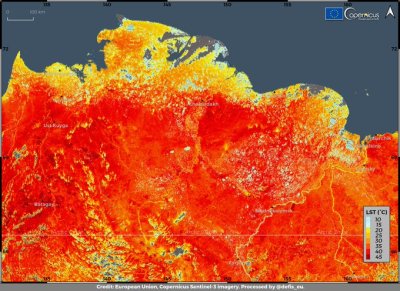 The effects of global warming have arrived in Russia and already causing problems. There was a massive oil spill in the Far Northern mining city of Norilsk earlier this year that was declared a federal emergency after a pipeline sank into the mud and broke. The accident, which will take decades to clean up, was blamed on melting permafrost, caused by unusually high temperatures.

A week later a once-in-1,000-year snow melt in the northern city of Murmansk caused a local hydropower station to be flooded. No damage was done, but the plant was put on emergency alert as water levels rose dramatically after snow at the nearby lake melted due to rising temperatures.

Scientists are becoming alarmed by the spike in temperatures in Russia this year. While temperatures are creeping up everywhere, those in Siberia have spiked dramatically this year.

On June 20 the Weather and Climate weather portal recorded a temperature of 38C in Verkhoyansk in the Sakha Republic in the centre of Russia, the coldest town in the world with a record all time cold of -67.8C.

Verkhoyansk also holds the Guinness World Record for the highest recorded temperature range of 105 C, fluctuating from minus 68C to a high of 37C, reports the Moscow Times.

The weather forecast in Verkhoyansk usually makes for pretty sobering reading. The outlook for the coming week is temperatures will fall to the mid-30s, but that is still a full 10 degrees higher than normal in late June.

Russia is warming more than twice as fast as the rest of the world, according to scientists. Average temperatures are 5.3С above the 1951-1980 average, and have surpassed the previous record by a "massive" 1.9 C, Berkeley Earth project lead scientist Robert Rohde said, as cited by the Guardian.  Scientists expect 2020 to rank among the world’s five warmest years in recorded history.

Russia has just been through the warmest winter for 130 years with the local Muscovites complaining there was no snow in December and the Ukrainian capital of Kyiv was likewise bare of snow until very late into the winter. A snowless Moscow is unheard of that usually spends hundreds of millions of dollars on the “snow brigades” – an army of workers that works around the clock to keep the roads open to traffic and the pavements clear for pedestrians by constantly clearing tonnes of snow after every major fall.

The warm weather has also caused economic problems as the lack of demand for heating has led to a European gas glut, one of Russia’s main export products. The prices fall to below $100 per thousand cubic meters for the first time in years due to the lack of demand. Only four years ago the prices were four times higher, but there is so much spare gas this year producers are running out of places to store it.

Agriculture will also suffer, another major export product, as the unusually dry spring is expected to bring down crop yields this year by up to 10%. Russia earned circa $25bn from grain exports last year, about $10bn more than it earns from arms exports and the country’s second biggest export product after raw materials.

The rising temperature in Russia threatens some of its most valuable real estate, as most of its oil and gas pipeline infrastructure is built over permafrost, bring the hydrocarbons to market from the inhospitable frozen interior. If the permafrost melts then much of this infrastructure could sink into a quagmire, causing tens of billions of dollars of damage.

Several settlements, many of them built in Soviet times to house workers at mines throughout Russia’s vast hinterland to exploit its natural resources treasure, could also sink into the mud, as many buildings are standing on piles drilled into the permafrost and will collapse if the ground melts.

Russia has recently signed off on the Paris Accord and has started to think about measures to combat the climate crisis, but as bne IntelliNews reported in “the Cost of Carbon in Russia”, its actions so far are half-hearted and the Kremlin has set itself easy goals that won’t result in much change or cost.

And the melting of the permafrost will not just threaten Russia’s economic interests but could cause a catastrophic one-time change to the atmosphere that would send temperatures up by several degrees overnight, with unpredictable consequences.

One trillion tonnes of prehistoric carbon dioxide have been trapped in the permafrost since the time of the dinosaurs that scientists say could suddenly be released all in one go if the average temperature of the ground in Russia’s taiga rises above 0C. Currently the average temperature of the ground in the massive tracts of the taiga east of the Ural mountains is -3C, but scientists say it is rising by about 1C a decade and the irreversible release of pre-historical CO2 is still three decades away.

However, this year’s heat wave suggests the process of heating up the frozen ground might be happening faster than expected.

Currently, the only effort to slow down the warming of the permafrost is being carried out independently of the government by the father and son team of Sergey and Nikita Zimov, who live in Novosibirsk in Siberia.

They have set up a park and are trying to bring deer and elk to the park as the animals trample the snow, packing it down, which forms an isolating layer over the permafrost and prevents it from warming as quickly.

However, their work is confined to the Pleistocene Park, a 14,000-hectare reserve near Chersky in Siberia founded by the elder Zimov 19 years ago and is only a tiny fraction of the permafrost fields that stretch almost half way round the planet.

To work, the Zimovs say they need 20 large beasts per square kilometre, which would entail millions of deer, moose and elks being imported into the region. Most of the animals that the Zimovs have brought to their park so far have either died or escaped. Currently their herd consists of a total of 70 animals.