Tens of thousands displaced as Tajikistan, Kyrgyzstan conflict rages on 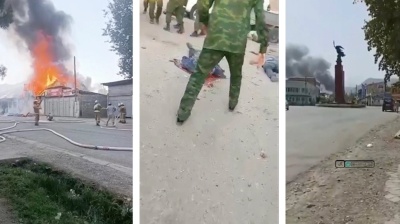 Around 120,000 people have been evacuated from their homes in an area of Kyrgyzstan where fierce fighting is ongoing against forces from neighbouring Tajikistan, a senior Kyrgyz government official has said.

Marufkhan Tulayev, the first deputy presidential plenipotentiary representative to the Batken region, said residents of numerous villages in the Batken and Leilek districts were able to transit out of the area through Sokh, an enclave belonging to Uzbekistan.

Heavy exchanges of gunfire and shelling raged throughout the day in locations up to 80 kilometres apart. There was a brief respite in the afternoon, around the same time as the presidents of the two nations were meeting on the sidelines of the Shanghai Cooperation Organization (SCO) summit that took place in the Uzbek city of Samarkand.

The Kyrgyz Health Ministry says at least 55 people have been injured during the clashes and that most of the casualties are being treated for gunshot and shrapnel wounds. A 15-year-old girl in the Kyrgyz village of Dostuk died as a result of shelling, officials said.

Tajik officials have issued few public statements, and when they have, it has mostly been to blame Kyrgyzstan for triggering the unrest.

Tajiks have had to rely on social media to get some sense of the toll of the unrest on civilians. One piece of footage shared via Telegram showed five people in civilian clothing killed in the Tajik enclave of Vorukh, which is surrounded by Kyrgyz land. It is uncertain how they were killed, although the nature of some of the wounds suggest gunfire. 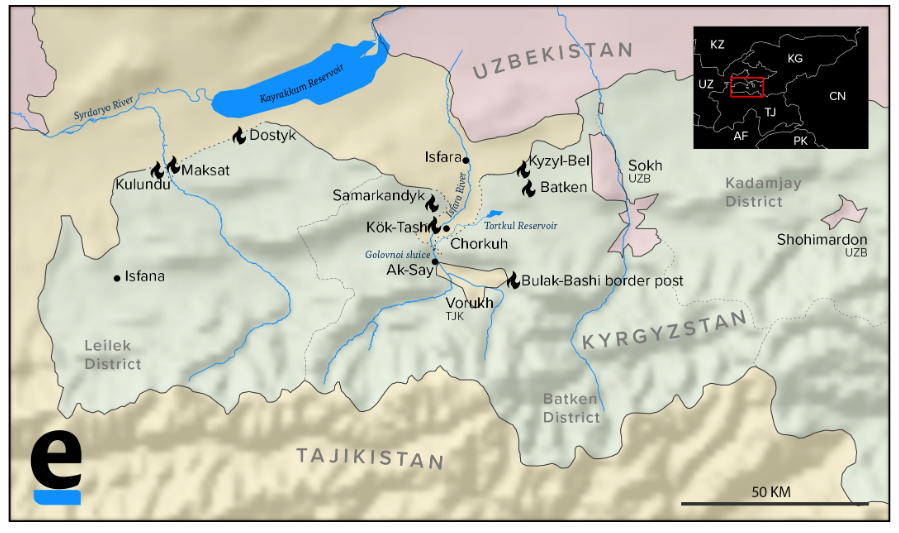 These events have dashed slim hopes that the calm seen on September 15, one day after another bout of battles between border forces left at least two Tajik troops dead, might persist.

The Kyrgyz government says Tajikistan initiated the renewed trouble on September 16 by mounting unprovoked mortar assaults on multiple inhabited areas along the perimeter of the border. Security officials say that even Batken, the capital of the eponymous region, which is 10 kilometres from the border, was targeted with shells.

24.kg news agency cited the head of the Batken region as saying early in the day that Tajik forces were deploying “mortars and large-calibre weapons.”

As news of the unrest began to spread, demonstrators gathered in front of the White House government building in the Kyrgyz capital, Bishkek, to demand that the authorities react more firmly in the face of the crisis.

In Batken, civilians have reportedly been asking to be given weapons so that they might join in the fight. One filmed exchange in a crowd in the city appeared to capture the spirit.

“They should give rifles to our Kyrgyz guys, organise them into groups of 10,” one man in his fifties told a crowd. “Give our women guns too. They [Tajiks] are attacking us and we’re defending ourselves with rocks.”

In the early afternoon, local media reported that Tajik troops had taken over the premises of a school in the Kyrgyz village of Dostuk. Footage circulated on social media showed a Russian-made Uragan rocket launcher driving through the Tajik city of Khujand, the capital of the northern Sughd region, a brief drive from an area where some of the bitterest clashes have taken place.

In one of their many updates released throughout the day, the Kyrgyz security services, which run the border force, accused Tajik armed forces of purposely targeting schools, kindergartens, shops, first-aid points and homes.

“They shout nationalist slogans, behave blasphemously and desecrate the bodies of Kyrgyz border guards killed at their post,” one statement read.

The Tajik security services had their own accusations too. They said Kyrgyz troops were firing toward the settlements of Ovchi-Kalacha, Bobojon, the Gafurov district, Vorukh and Chorkuh. They alleged moreover that Kyrgyz forces had used attack helicopters and drones to target residential buildings and other civilian facilities in Tajikistan.

In another statement, Tajik security services claimed that their troops had sought repeatedly to establish a ceasefire, but that these overtures have been ignored.

“The armed forces of the neighbour country are using all types of available heavy guns and firearms and subjecting villages on the border to intense mortar bombing,” the State Committee for National Security, or GKNB, said in a statement. “Servicemen from Kyrgyz special forces units … have carried [out] armed attacks on homes and set fire to residential buildings.”

While Kyrgyz officials have briefed the public regularly on the measures it has taken to evacuate civilians and provide them with food and medical aid, the Tajik government has not said what it is doing to help its own population.

Quite how this crisis began, on September 14, is the object of contradictory claims.

On that day, Tajikistan’s security services claimed that troops from Kyrgyzstan’s Batken province border unit fired mortars without cause at their troops posted in a remote and uninhabited mountainous location north of Vorukh.

Kyrgyz security services said the confrontation began when one of their men discovered a Tajik border guard in a position beyond a demarcation line previously agreed upon by both countries. The Tajik soldier refused to step down and eventually opened fire, they said.

Contained skirmishes of this nature between border troops operating along the undemarcated frontier occur on a relatively frequent basis, but the rapid spread of fighting to distant locations along the border indicated a more serious crisis was unfolding.

In the evening on September 16, Kyrgyz President Sadyr Japarov, who had by then returned to Bishkek from Samarkand, summoned a meeting of the national security council. Japarov’s office said the meeting was devoted to discussing measures to prevent further escalation.

A senior government source told Eurasianet that the country’s leadership is reluctant to engage in “a public blame game” about who provoked the violence.

“It is important to talk to the other side and not appeal to third parties,” the source said.

Meanwhile, Japarov’s Tajik opposite party, Emomali Rahmon, has yet to make any public statement on the unfolding events.