Tens of thousands march in Bulgaria to support Ukraine 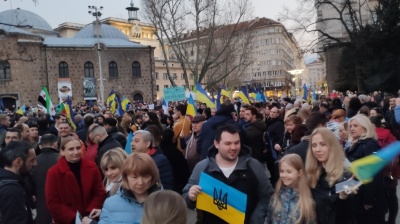 Tens of thousands of people marched in the Bulgarian capital Sofia on March 24 to mark one month since the start of Russian war in Ukraine and demand its end.

The march, the first since the start of the war, gathered together Bulgarians, Ukrainian refugees, as well as Russians and other foreigners supporting Ukraine against Russia. According to estimations, the number of people was similar to that of the biggest protests ever held in the country.

“Praise Ukraine! Praise heroes!”, "Putin, Shoygu, Lavrov, welcome to the Hague", “Putin khuilo [penis]” and “Russian war ship, go f*ck yourself!” were among the most chanted along with the Ukrainian state anthem.

She was laughing for the first time since her escape from the war along with her mother and sister.

“I am proud of all Bulgarians who have come today,” Elisaveta Belobradova, MP of Democratic Bulgaria, wrote on Facebook after the rally.

The gathering was organised by several individuals and not backed officially by political formations. Its organisers called on people to stand together to show Ukrainians that Bulgaria is supporting them in their war for their homeland.

The rally took place on the day when Nato decided to strengthen its Eastern flank and send more troops to Bulgaria, Romania, Hungary and Slovakia.

People were calling on their government to take more decisive steps to support Ukraine, sending much-needed military aid. The government in Sofia is refraining from that, claiming that the risks are too high as it is too close to the war zone.

President Rumen Radev went even further, saying that Ukraine is much better armed than Bulgaria and that Sofia must make efforts to obtain more defence equipment instead of sending it to Ukraine.

On the other hand, Radev expressed support for Nato’s decision to send troops to Bulgaria, saying they would add to the battle group the authorities are forming.