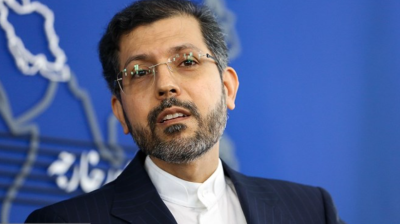 There were fresh tensions between Iran and the US ahead of an expected December 9 return to the Vienna nuclear deal talks after the Biden administration imposed fresh sanctions on Iranian entities and officials. Tehran warned Washington it should not calculate that the measures would “create leverage” in the negotiations, called as attempts continue to find an agreement that would restore Iranian and American compliance with the deal, known as the JCPOA.

The US Treasury Department blacklisted the Special Units of Iran’s Law Enforcement Forces and Counter-Terror Special Forces and several officials linked to the agencies, accusing them of human rights abuses.

Rebuking the US for announcing the sanctions on the eve of the next stage of the talks, Iranian Foreign Ministry spokesman Saeed Khatibzadeh, referencing the former Trump administration’s “maximum pressure” strategy directed at Iran, said on Twitter: “Washington fails to understand that ‘maximum failure’ & a diplomatic breakthrough are mutually exclusive. Doubling down on sanctions won’t create leverage—and is anything but seriousness & goodwill.”

The JCPOA was signed by Iran, the US and five other major nations in late 2015. It tied Iran to compliance with terms that would ensure its nuclear development programme was kept entirely civilian. In return for the compliance, heavy economic sanctions were lifted. But in May 2018, then US president Donald Trump unilaterally abandoned the multilateral deal, arguing it should be tougher on Iran, and brought in sanctions aimed at crippling the Iranian economy. In response, Iran has gradually moved to a point where its nuclear activities breach the JCPOA in numerous and substantial ways.

Fear of next US president

A problem with current US President Joe Biden’s wish to resurrect the deal with full Iranian and American participation is that even if sanctions are lifted, it is unlikely that many foreign investors will return to Iran as they will fear that the next US president, should he or she be a Republican, will reimpose the sanctions. Given the situation, there are arguments that it might suit Iran, the US, the remaining JCPOA signatories and Israel—which, despite persistent denials from Tehran, claims the Iranians are intent on developing nuclear weapons—to conclude the Vienna talks with the “coma option”.

The option has been described by Trita Parsi, executive vice president of the Quincy Institute. Under the scenario, explained Parsi, in which the negotiations to resurrect the nuclear deal have become almost deadlocked, the JCPOA “would all but die, but the parties would pretend that it is still alive to avoid the crisis that its official death would spur. Let’s call it the coma option. Think of how Western powers have pretended that the Israeli-Palestinian peace process has been alive for the last decades”.

The US last week accused Iran of walking back previous diplomatic progress made in the Vienna talks earlier this year.

However, neither the US nor Israel are making the case that an Iranian nuclear bomb could be imminent. Israel has lately stated that Iran is likely around five years from having a nuclear weapon if its current rate of development progress continues, while William Burns, director of the CIA, on December 6 told The Wall Street Journal's CEO Council Summit: "We don't see any evidence as an agency right now that Iran's supreme leader has made a decision to move to weaponize [nuclear know-how]".

Burns described Iran's challenge as "a three-legged race" to obtain fissile material, to "weaponize" by placing such material into a device designed to cause a nuclear explosion and to mate it to a delivery system such as a ballistic missile.

On weaponization, Burns said "the Iranians still have a lot of work to do there as far as we judge it".