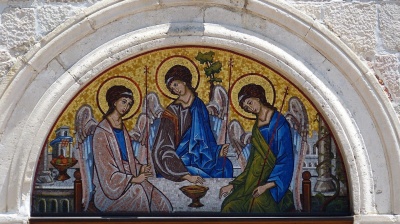 Tensions in Montenegro started escalating again after Prime Minister Dritan Abazovic announced that the government is going to sign a fundamental agreement with the Serbian Orthodox Church. The news sparked protests and threats by Abazovic’s coalition partners that they might not support the deal.

The agreement is intended to ease relations with the Serbian Orthodox Church, following tensions caused back in 2020 by the adoption of the church law by a previous government.

The church law, according to its critics, would take away key property from the Serbian Orthodox Church in Montenegro. That led to an escalation of tensions and significant worsening of the relations between the two countries.

Abazovic said at the end of June that an agreement would be signed with the church that would resolve the issues between the two parties.

The move was not well accepted by the Democratic Party of Socialists (DPS) led by President Milo Djukanovic, which has backed Abazovic’s government and is the largest party in parliament. A government led by Djukanovic’s DPS adopted the church law before losing the election later in 2020.

However, the head of state called on people to calm down and downplayed the issue, saying Montenegro faces more important problems, public broadcaster RTCG reported.

“I am convinced that, on the one hand, no one questions the need for signing this treaty, it is simply a civilised relationship between the state and every religious community. It is unjustified that no contract has been signed so far,” Djukanovic told reporters.

He added that such agreements have already been signed with the other religious communities in the country and that it was good that the two parties have found common ground at last. This is not Montenegro’s most important problem, he added.

His comment came after his DPS party reacted negatively and a few hundred people went out the streets to protest and seek Abazovic’s resignation. The DPS and the Social Democrats (SDP) criticised a draft of the "Basic Agreement on the Regulation of Mutual Relations" published on June 28 as overly generous toward the Serbian church.

“It is certainly not the most important issue for Montenegro and its future. For Montenegro and its future, the most important thing is to unblock the negotiation process and move towards Europe and to work devotedly on its economic, democratic and institutional development, but by circumstance it has become an important political issue on the domestic political scene,” Djukanovic said.

Abazovic said that all opponents of the draft agreement were able to express their opinions before publishing it, but they did not. Abazovic also said that his government will close this issue, which has been causing most of tensions with Serbia.

Two-thirds of Montenegro’s population of around 620,000 is Orthodox Christian and the main church is the Serbian Orthodox Church.

Protests about the earlier church law contributed to Djukanovic’s three-decades ruling DPS losing its majority back in 2020.

The following summer, protests erupted against the inauguration of the new head of the Serbian Orthodox Church in Montenegro with the police using tear gas and arresting dozens of people. Montenegro’s population was divided over the inauguration plans in the city, which was strongly opposed by Djukanovic and the DPS seen by some as a threat of Serbian hegemony over the small country.