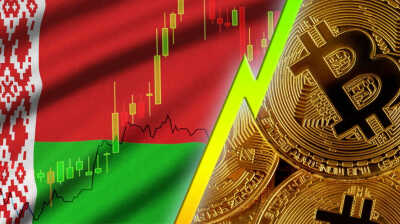 The EU's latest sanctions package makes it harder for Russian and Belarusian actors to evade sanctions using cryptocurrencies. In light of this, it’s also important to remember what the Belarusian regime's "crypto friendliness" is actually based on.

After the EU’s first round of sanctions against Russia and Belarus following Russia’s invasion of Ukraine, sanctioned Russian and Belarusian actors began using cryptocurrencies to evade them.

However, the EU’s fifth sanctions package put a stop to this, as it forces crypto companies in Europe to restrict services to Russians and Belarusians, thereby closing potential loopholes.

Fines will be given to companies that allow cryptocurrency transactions with sanctioned firms and individuals to take place. Moreover, transfers from crypto wallets registered in Russia and Belarus have been banned completely.

Of course, fears immediately arose that Russia and Belarus would simply use non-compliant crypto exchanges and mining to obtain cryptocurrencies. While this might be the case, the loopholes are certainly closing one by one.

Japan has also urged the country’s crypto exchanges to prevent digital transactions subject to sanctions against Russia and Belarus. Even Belarusian crypto exchanges have limited transactions with Russians in response to the war against Ukraine, showing signs of sanction compliance even within the sanctioned countries.

Is the Belarusian regime crypto-friendly?

The Belarusian regime has several times before been celebrated by crypto traders for its relatively liberal stance on cryptocurrencies.

Belarus showed interest in the cryptocurrency industry quite early on and created its cryptocurrency industry through a series of liberalising legislation between 2017-2019. Today it ranks number three in Eastern Europe in terms of crypto adoption due to its strong peer-to-peer activity. According to TripleA ownership data, there are more than 350 000 Belarusians (3.73% of the population) who currently own cryptocurrencies.

However, it’s important to remember that while it’s legal to trade and own cryptocurrencies in Belarus, they are prohibited from being used as means of payment or fiat substitutes.

In January this year, as Russia was mulling its cryptocurrency ban, Belarus was celebrated by the crypto community for not planning to further regulate crypto trade and was thought to become a safe regional haven for cryptocurrencies in Eastern Europe.

Later in February, Belarus’ Ministry of Finance published a proposal that permitted investment funds to put money into digital currencies. This specific decision could have been taken in order to increase the state’s investment fund’s access to more capital markets as sanctions kept shutting it out of western ones.

While the Belarusian regime might seem “crypto-friendly” and surprisingly liberal, it also feels threatened by crypto currencies.

In February, Belarus also adopted a legal framework for the country’s cryptocurrency regulator, Hi-Tech Park, which let it create and maintain a database of crypto wallets which are related to “illicit operations”; among these activities, “extremism and terrorism” were mentioned.

This is, of course, not a bad thing per se, since it can help prevent organised crime in, for instance, the illegal weapons or drug trades. However, those who have followed the Belarusian regime’s rhetoric to justify its repressions know that “extremism” can be just about anything, and often simply relates to anything oppositional.

For instance, just displaying a white-red flag in your window or saying that you hate the president could get you in court for being an extremist. When it comes to “terrorist” activities, the state regularly concocts accusations against the exiled opposition for planning terrorist attacks.

Lukashenko has repeatedly mentioned cryptocurrencies as a tool for opposition activists to receive payments. He’s even accused several Belarusian companies of financing protesters with money gained from tax evasion and paid through cryptocurrencies.

The Belarusian opposition has admitted that it sends aid in the form of cryptocurrencies to its active supporters still in Belarus and to people who've run into financial problems due to repressions.

The latest step to accept crypto wallets as long as they don’t engage in “illicit operations” has been celebrated by crypto enthusiasts, since it reinforces Belarus’ commitment to normalising the status of cryptocurrencies in the global economy.

In a country where property rights and democracy are respected, we can be sure that a move will be used to prevent crimes such as the trade in illegal weapons or drugs.

Sadly, the Belarusian regime’s definitions of what is illegal and what’s not brings in the exact same problem of arbitrariness which arises in any dictatorship: economic actors cannot feel safe, since their transactions and property rights merely depend on the whim of the ruling party.

While the extent to which the regime uses cryptocurrencies to evade sanctions can’t be proved, it’s highly likely that it uses them in order to access foreign capital and this might be a reason for it to create general liberalising laws, while at the same time regulating any use of it that counteracts regime stability.