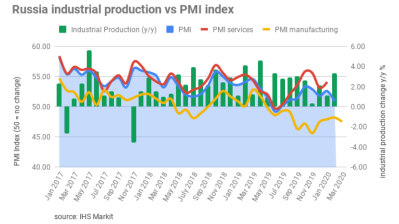 The headline seasonally adjusted IHS Markit Russia Manufacturing PMI dropped from 48.2 in February to 47.5 at the end of the first quarter.
By bne IntelliNews April 1, 2020

It is still too early for the full impact of the double whammy of the oil prices crash and the manufacturing and retail coronavirus (COVID-19) pandemic-related stop shock on Russia’s IHS Markit Russia Manufacturing Purchasing Index (PMI) to show, but the index was already sliding in March before the storm broke at the end of the month.

The headline seasonally adjusted IHS Markit Russia Manufacturing PMI dropped from 48.2 in February to 47.5 at the end of the first quarter. The decline in operating conditions across the sector was the strongest for three months. Any result below the 50 no-change mark is a contraction.

First in, first out; China's PMI was especially hard hit by the epidemic and its PMI fell to an all time low of 35.7 in the worst month in February. However, in the March result the index bounced back to well over 50 in a V-shaped recovery. Russia is just going into its worst month now. 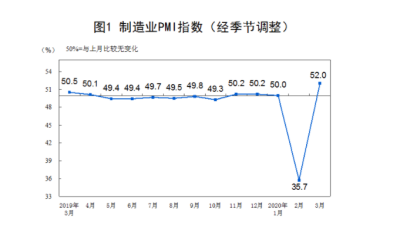 Russia’s own coronavirus epidemic has taken off later than most of the other countries in the region, but as of April 1 the official number of reported cases had reached 2,337, up from only two a month earlier. Moscow was only locked down on March 30 and the rest of the regional cities are likely to follow in the first week of April.

The changes in the March manufacturing PMI are related to the growth of the virus elsewhere that was increasingly unsettling businesspeople, but the impact of Russia’s own epidemic will only be clear in the April results.

As a result of the escalating crisis in the rest of Europe, business confidence dropped to a series low as firms expressed uncertainty towards the global economic outlook following the outbreak. Nonetheless, employment was broadly unchanged despite a strong fall in backlogs of work, reports Markit.

The headline figure was also slightly buoyed by a solid deterioration in vendor performance. A key factor behind the latest overall contraction was a solid decrease in production. Although a number of firms stated that greater competition and a general drop in client demand had driven the decline, others linked the downturn to the impact of COVID-19 on business. Furthermore, the fall in output was the fastest since last November.

Concurrently, domestic and foreign demand conditions weakened as the outbreak of COVID-19 resulted in more stringent measures regarding the operations of businesses across the world. The sharp fall in total new orders was the quickest for four months and extended the current sequence of contraction that began in June 2019. Mirroring the trend for total sales, new export orders decreased steeply in March, Markit said in a note.

“In line with weak demand conditions and global economic uncertainty, the degree of confidence at manufacturers fell to a series low. Firms nonetheless still expect output to rise over the coming 12 months, although the level of optimism was noticeably lower than at any other point in the series' eight-year history,” said Markit.

China’s clash with the virus has hit commodity prices and disrupted global supply chains, and that is feeding through into economic pain around the world.

In Russia the rates of input cost and output charge inflation quickened in March as raw material shortages resulted in supplier price hikes. The pace of increase in cost burdens was the fastest for a year. At the same time, goods producers raised their factory-gate charges at a strong rate, as they partly passed on higher input prices to clients.

Despite a further fall in new orders, the pace of contraction in employment softened and workforce numbers were broadly unchanged at the end of the first quarter, says Markit. But that is also expected to change rapidly in the coming quarter as stay-at-home workers are laid off. bne IntelliNews sources are already reporting deep salary cuts being forced on workers as a result of the crisis, and unemployment is expected to soar.

Commenting on the latest survey results, Siân Jones, economist at IHS Markit, said: "The Russian manufacturing sector remained in contraction in March, as the impact of the outbreak of COVID-19 began to emerge in global supply chains and external demand conditions. A sharper decline in new orders was also linked to weak domestic demand, as firms struggled to build growth momentum.

"Nonetheless, the decline in workforce numbers eased as employment was broadly unchanged, despite reports of redundancies,” Jones added. "Uncertainty regarding the strength of the global economy and future demand weighed heavy on manufacturers' minds as business confidence sank to a series low. Our current forecast for industrial production indicates a contraction in year-on-year terms in the first quarter of 2020, with the decline accelerating through to the latter stages of the year."

LONG READ: The Growers - a handful of countries in New Europe are coping with the coronacrisis and are still expanding
Russia's Sberbank opens a commodity trading subsidiary in Zug in Switzerland
New coronavirus cases decline across emerging Europe but the epidemic’s not over yet