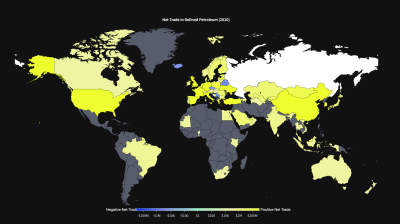 Russian exports of refined oil products are widely distributed throughout Europe, but Netherlands, Germany, Poland and Italy dominate the much bigger exports of crude and those are harder to stop. / OEC
By Ben Aris in Berlin April 17, 2022

European officials are drafting plans for an embargo on Russian oil products, the most contested measure yet to punish Russia for its invasion of Ukraine and a move long resisted because of its big costs for Germany and its potential to disrupt politics around the region and increase energy prices.

The EU earlier this month banned Russian coal for the first time in a fifth package of sanctions imposed in April. Now oil is set to become part of a sixth package that is likely to be imposed even if there are no new triggers, say EU officials.

Russia is the European Union’s largest oil supplier, providing the bloc with a quarter of its oil and petroleum product imports in 2020, and as bne IntelliNews reported in a deep dive into Russia’s oil and other energy businesses, “sanctions by the numbers” (UN voting, coal, oil, gas, grain), a ban on oil exports could have a devastating impact on Russia’s budget revenues.

The earliest the proposed EU embargo will be put up for negotiation will be after the final round of the French elections, on April 24, to ensure that the impact on prices at the pump doesn’t fuel the populist candidate Marine Le Pen and hurt President Emmanuel Macron’s chances of re-election, officials told the New York Times.

Germany is particular vulnerable, as it imports 34% of its oil from Russia and has been resisting a quick, universal and simultaneous EU-wide oil embargo. Out of all the European countries, Germany is the biggest importer of Russian oil and its two big refineries are fed by Soviet-era pipelines that make it difficult for them to change suppliers. In addition, the refinery in the eastern city of Schwedt near the Polish border provides 95% of Berlin’s oil products and is majority owned by Russian oil major Rosneft.

Hungary has also been resisting the ban, as it is also highly dependent on Russian oil, and Hungarian Prime Minister Viktor Orban has been a vocal Russian supporter. Orban recently signed a new and expanded long-term gas supply deal with Russia and also caused a furore by agreeing to Russian President Vladimir Putin’s rubles-only-for-gas deal that was imposed in April. EU President Ursula von der Leyen has accused Hungary of sanctions busting, but Budapest says the EU has no jurisdiction over a contract signed and altered by the two parties.

Orban has demanded future sanctions be decided by EU leaders rather than senior diplomats or ministers, raising the prospect of an emergency summit meeting to debate the topic. Sanction deals have to be agreed unanimously by all 27 EU members. The next European Union leaders’ summit on Ukraine is scheduled for the end of May, but observers say that could be moved forward as the crisis gathers momentum.

Putin has admitted that the sanctions are causing Russia economic pain and has urged his minions to find new markets for Russian hydrocarbon exports in anticipation of new sanctions on oil and gas coming into effect soon.

“The most urgent problem here is the disruption of export logistics,” Putin said at a meeting on April 12, which included his top advisers. “Furthermore, there are setbacks in payments for Russian energy exports. Banks from these unfriendly countries are delaying the transfer of funds.”

None of the details of the proposed oil ban have been made public, for fears that would expose rifts within the EU membership and cause a public backlash, particularly in France which is in the middle presidential elections. However, details on the structure of the ban are being thrashed out by small working groups over the Easter break to try to arrive at a phased formula all the member state can live with, reports the NYT.

The most likely approach is to distinguish between oil products and modes of transport. As bne IntelliNews reported in its deep dive into the oil business, Russia exported $48bn worth of refined products last year to a wide number of EU countries from its domestic refineries and those it owns in Europe. These sales would be easier to cut off, as each country can source the refined products from other suppliers. The Netherlands, France, Turkey and Germany are the biggest customers. The US also imported $4bn worth of refined products that year, but has now banned the trade following the invasion of Ukraine.

Cutting off crude exports is much harder, partly because some of the biggest European refineries are still hooked into the Soviet-era Druzhba pipelines that make it difficult to switch suppliers of crude.

Russia exported $74.4bn of crude in 2020, but a third of that went to China, with the EU countries of the Netherlands, Germany, Poland and Italy receiving the next 30% – Germany being the biggest EU customer.

From the Russian side, if the EU cuts off deliveries then this volume of oil would be too big to send to other markets, as they simply could not absorb it all. Big non-European customers like India and China wouldn't want to try either, as they would have to cut back on other suppliers and raise their dependency on Russia as a supplier to over 40%, which comes with political consequences.

In addition, there is no pipeline infrastructure to rapidly increase supplies to Asia, so the entire European supply, most of which is currently piped, would have to be loaded on to ships. Russia’s own fleet of supertankers is insufficient to carry all this oil and could manage about 10% of the total. All Russia’s Soviet-era oil pipeline infrastructure is pointed west, with only two new low-capacity oil pipelines currently running from the Siberian oilfields eastwards, and both of those are already at full capacity. 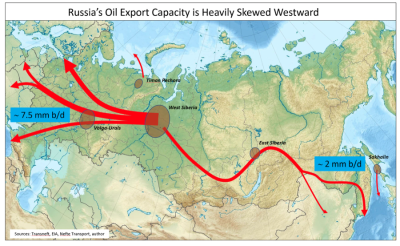 Russia would have to commission some 200 supertankers to carry the EU oil, which would be a logistical problem, but these international tanker companies could also be easily targeted by secondary sanctions and so put outside the Kremlin’s control. The upshot is: a total EU ban would send the Russian oil industry into crisis and do major damage not only to the Kremlin’s finances, but also to Russia's production base, as marginal oil wells would have to be closed down that would be impossible to restart once they were turned off for technical reasons.

Once the sixth package is introduced there will be a one-month minimum transition period for EU members to find new suppliers of refined products and a lot longer period for Germany to find ways of supplying its refineries with crude whose origin has yet to be determined.

German Economy Minister Robert Habeck has publicly stated that the country is weaning itself off Russian oil with a year-end horizon, a timeline that would likely be expedited.

“Companies are letting their contracts with Russian suppliers run out, not renewing them and switching to other suppliers at an insane pace,” Habeck said in Berlin in late March as cited by the NYT.

Since the start of the invasion, Germany has been frantically trying to reduce its reliance on Russian energy, including oil. However, an early progress report released by the German economics ministry on March 25 suggests that the EU’s previous deadline to end Russian energy imports by 2025 will be hard to reach, and little progress has been made.

“Import of oil products from Russia will account for about 35% in 2021. In the last few weeks steps have been taken to end supply contracts with Russia. Supply contracts are expiring and are not being extended. Imports are rapidly being replaced,” the German Energy Ministry said in its progress report, adding that the share of Russian oil in supplies would be reduced to 25% in the coming months. “Russian oil imports to Germany are expected to be halved by the middle of the year. By the end of the year we aim to be almost independent.” 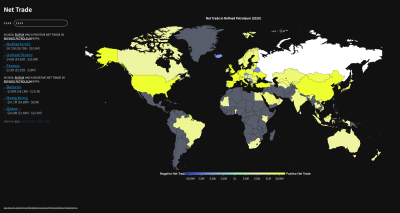 Czech government remains colour blind on green issues
7 hours ago
Poland ups the ante in feud with Brussels over judiciary reforms
18 hours ago
What's the current outlook for Belarus' export sector?
1 day ago
Russian gas exports to Europe tumble in June
1 day ago
Can we trust Russia’s economic statistics?
3 days ago