The hoovers of Nukus 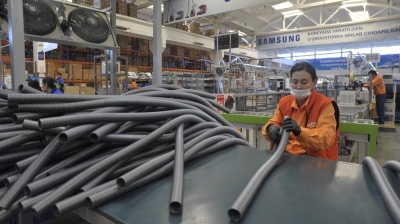 Surrounded by deserts, the Artel hoover factory in Nukus is making white goods that dominate the local market and are now being exported all over the CIS and increasingly further afield.
By Ben Aris in Nukus November 6, 2021

Flying into Nukus in the far west of Uzbekistan, the ground surrounding the city was white. The Soviets flooded the land with water to grow cotton for decades, and that ended with the disappearance of the nearby Aral Sea. The resulting ecological disaster poisoned the soil, leaving a crust of salt that lay on the ground like snow. Dust storms hit the city a dozen times a year.

The city seems like an unlikely location to set up a production line to produce Samsung vacuum cleaners to supply the domestic market and increasingly for export. Shipments are going first of all to the Commonwealth of Independent States (CIS), but, more and more, further afield to the rest of the world.

The unlikely arrival of the production line is what happened when Artel, Uzbekistan’s biggest consumer electronic firm and now the largest manufacturer of white goods in the Former Soviet Union (FSU), opened its plant in Nukus 20 years ago.

Over the last decade, Nukus has recovered. The salt is gone and the local administration has re-tasked the agricultural production away from the water-intensive cotton production to fruit and vegetables as well as developing industry to ensure the local population is employed and can earn a living.

Nukus is home to one of Artel’s many production centres scattered around the country. The company was founded in 2011 and amongst its early businesses was producing Samsung white goods under licence. Since then Artel has introduced a range of its own brands, which dominate the markets of Central Asia and are best sellers in the burgeoning export market of the CIS. 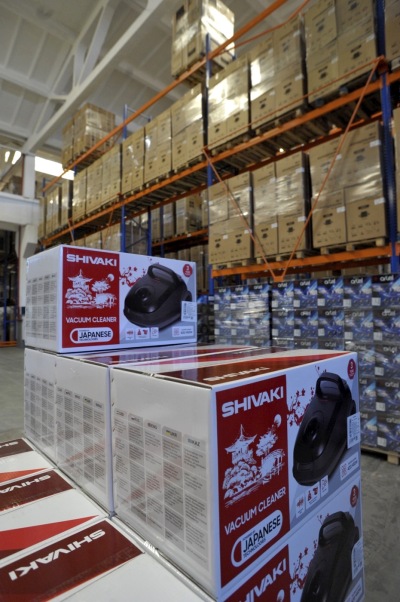 Ferus Kholmorodov, the deputy director of the factory, meets us as the gates of the modern building on the edge of the city of 300,000 inhabitants. Originally housed in a renovated factory building, the facility was completely renovated in 2017 and today is a modern building that houses the company’s equipment and production lines.

The Nukus factory makes hoovers, which are assembled on a line of 230 workers before they are packed and stored, ready for delivery at the end of the hall. The factory also serves as a distribution hub and a variety of other products are waiting on the industrial shelves ready for delivery elsewhere in the country. The factory is churning out 1,300 hoovers a day and some 364,000 were made last year alone.

Since setting out the company has broadened its range of goods and while Samsung hoovers are still prominent in the production at Nukus, the factory also makes its own Shivaki hovers, which are based on Japanese technology that the company bought the rights to several years ago.

“We are the biggest private employer in the city,” says Kholmorodov. “We used to assemble TVs here too but three months ago that was moved to another factory in Akhangaran in the Tashkent region, which also makes TVs, to consolidate the production in one place.”

And the factory doesn't only assemble the vacuum cleaners, but presses its own components in a series of Chinese-made giant plastic machines.

“In the beginning we made only 10 components here but now it’s over 150,” says Kholmorodov. “About 65% of the component production has been localised, with the rest imported from China, Vietnam and Korea, where Samsung also has factories.”

Nukus may seem a little out of the way, as it is in the far west of the country. Artel has its biggest flagship production facilities in Tashkent, the nation’s capital, but when the company was founded then-president Islam Karimov insisted a facility was built in Nukus to support the beleaguered local economy and the company has kept it there as part of its developing ESG (environment, social and corporate governance) policies to support society with its work. It is part of the reason that Artel has built facilities around the country in several of the larger cities to provide jobs for the locals.

The presence of the government in business has retreated but the state is still a major driver for business in the country. A portrait of Mirziyoyev hangs on the wall in the main meeting room, as is common across the whole CIS, and a giant banner hangs across the main wall in the production hall, a quote from the president: “Innovation is the future for our country’s development.” Old habits die hard.

Nukus’ local economy is now back on its feet. The plastic granules for the Chinese presses come from the local state-owned plant that employs 7,000 people and mostly exports its output all over the world.

The domestic market for white goods has been growing steadily in the last decade as the economy has stabilised and since President Shavkat Mirziyoyev took over in 2016 business has been good. Stability and the opening of the economy have allowed companies like Artel to flourish. One of the biggest changes was the lifting of exchange rate controls in 2017 that killed international trade. A large share of the Nukus output now is exported. 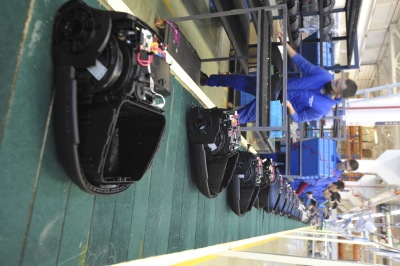 “Ukraine and Kazakhstan are the most important markets, but we export to all the countries of the CIS,” says Kholmorodov. “And this year we are just about to start exports to Nigeria, Tanzania and Syria.”

Exports have helped bolster the company’s bottom line during the pandemic. Kholmorodov says that domestic sales were hurt somewhat during the lockdowns in 2020, but the expanding exports have more than compensated.

The factory is an important component in bringing Nukus back to life and Artel is also planning to open a second factory in the city in the coming month that makes doors and flooring for the construction industry. It has also signed a co-operation deal with the local university, has invested in its engineering and IT departments, and will hire some of its students on graduation.

The UN has identified Nukus as one that needs special attention to prevent its depopulation. The UN has launched a special fund, in addition to assistance to the federal government, in order to support and develop the local economy.

The government is also working to improve the city’s situation and is about to make the region a free economic zone to promote more business and investment.

“We are not sure exactly what this will mean,” says Kholmorodov, “but I’m sure it will bring benefits and we will take advantage of them.”