The ins and outs of Nord Stream 2's certification 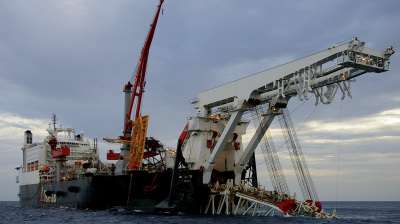 Exactly when Nord Stream 2 will be up and running is still unclear, but there are three main scenarios

What: Nord Stream 2 is awaiting certification before it can launch gas flow.

Why: In light of the crisis, the pipeline may be permitted to start sending gas before the certification process is complete.

What next: An OIES expects believes this is the most likely scenario, but there is a risk that the pipeline may not start operating until next summer.

The certification process at Russia’s embattled Nord Stream 2 (NS2) could drag into the summer of next year, although German regulators could let the pipeline begin flowing gas before the procedure is completed, given the energy crisis unfolding in Europe, according to a report by the Oxford Institute for Energy Studies (OIES).

Germany’s energy regulator BNetzA has until January next year to decide whether to certify NS2’s operator as complying with EU energy law. The European Commission then has up to two months to review draft BNetzA’s decision, or four months if it decides it needs to consult the Agency for Cooperation of European Regulators, or Germany or other interested parties. After that, BNetzA has another two months to issue a final certification process.

As such, the entire process could continue until July 2022, Katja Yafimava, senior research fellow at OIES, argues. As she notes, certification is normally an essential prerequisite for a pipeline to start up, and if NS2 were to start flowing gas before the process is complete, its operator could face fines for an administrative offence.

“Therefore, under normal circumstances, NS2 AG would start flowing gas only after the certification process has been completed and certification has been granted,” Yafimava argues. “However, from the gas supply perspective the winter of 2021/22 looks anything but normal. It is conceivable that BNetzA could indicate to the NS2 operator that it could start flowing gas before its certification process is completed and continue to do so on a time-limited basis to alleviate a supply shortage in Europe.”

Some countries consulting in the process are vocal opponents of Nord Stream 2, most notably Poland. Some of that criticism might be deflected, though, by the fact that NS2 AG began submitting its first certification documents back in June, giving BNetzA additional time before the last documents arrived in September.

NS2’s operator needs to be certified as compliant with the EU’s Third Energy Package rules on unbundling, third-party access and tariff transparency. Pipelines to and from third countries were not subject to EU law until 2019, when the bloc amended its gas directive in a move widely seen as targeted against NS2. The biggest obstacle here is the issue of unbundling. NS2 is wholly owned by a subsidiary of Russia’s Gazprom, which will also supply 100% of the gas that runs through it.

NS2 AG has applied to be certified as an independent transmission operator (ITO) – one of the three unbundling models allowed under the amended gas directive. The ITO model allows a pipeline operator to remain a part of a vertically integrated undertaking (VIU) such as Gazprom, provided the applicable safeguards are in place, ensuring the operator’s inability – or lack of incentive – to discriminate against third parties’ gas in favour of that of the VIU as far as access to the pipeline is concerned.

However, whether NS2 AG qualifies for the ITO model is not clear-cut.

“While this author believes that the NS2 operator is eligible for the ITO model, there is no single view on this matter,” Yafimava says.

The European Commission has reportedly said that the ownership unbundling (OU) model would have to apply, meaning Gazprom would have to sell off the pipeline. Critics of NS2 such as Poland’s PGNiG have similarly argued that the pipeline’s operator does not qualify for the ITO model.

What is more, the OU model is unlikely to be politically acceptable in Russia, as it would expose the project to US sanctions, Yafimava continues. In September 2021, the US House of Representatives passed an amendment to the National Defense Authorization Act, which stated that sanctions should be imposed “with respect on any entity responsible for planning, construction or operation of the Nord Stream 2 pipeline or a successor entity.” It also stripped the Biden administration of its right to issue a sanctions waiver.

“Certification of NS2 AG as an ITO, allowing the preservation of the NS2 pipeline ownership within Gazprom, would provide an iron-clad guarantee against US sanctions, should this amendment ever enter into force,” Yafimava says.

The expert concludes by stating it is most likely that NS2 will be permitted to flow gas on an ad hoc and time-limited basis before the certification process is completed, given the conditions on the European energy market. European politicians have accused Gazprom of withholding some gas supply, after repeatedly declining to book extra transit capacity via Poland or Ukraine and holding off on auction for spot volumes of gas. But it is unclear how much spare production capacity the Russian supplier actually has.

Yafimava notes that “the question of guaranteeing continued post-2024 Ukraine transit is likely to become an important factor, influencing whether either of these two scenarios will materialise. Failure to agree on it could significantly complicate, if not certification.”

There is a less likely third scenario that NS2 remains offline and certification runs its course into the summer of 2022.

“Under this scenario Russia’s pipeline gas exports to Europe (excluding Turkey) would be limited by the amount of firm capacity booked (or available for booking) on the existing export routes for as long as NS2 capacity remains unavailable – that is ~170-175 bcm/year (including up to 45.5 bcm via Ukraine), thus significantly limiting its contribution towards alleviating any European gas supply crunch in winter 2021/22 and European gas supply in the mid to long term,’ Yafimava says. “Without assigning probabilities to any of these scenarios, there is still hope – perhaps even expectation – that either of the first two scenarios will materialise, although the third scenario cannot be ruled out.”

The birth of a Kazakh banking empire: ATF Bank

ATF Bank started off as one of Kazakhstan's few private banks in the 1990s. By 2007, it was closing one of the biggest international deals in Kazakh banking. How did it achieve this, and could it happen again?

The war in Ukraine is starting to look like it might last a long time and that means putting the economy onto a war footing. Over the first six months of fighting running the economy has been little more than crisis management. Now it needs a plan.

The birth of a Kazakh banking empire: ATF Bank
1 hour ago
CEPR's action plan for Ukraine's wartime economy
12 hours ago
Missiles or sabotage: What caused the explosion at the Russian airbase in Crimea?
3 days ago
Population decline to take Emerging Europe back to the early 20th century
3 days ago
Czech government remains colour blind on green issues
4 days ago