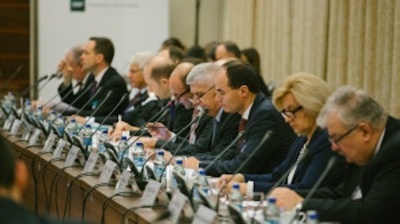 The annual full forum meeting of the Vienna Initiative in Warsaw in 2015.
By Gunter Deuber of Raiffeisen Research in Vienna March 27, 2020

Some 10 to 11 years ago the Central and Eastern Europe (CEE) region, and especially the countries in Central and Southeast Europe (CE/SEE) were on the brink of a sentiment and capital market collapse. International investors feared that international Western banks active in the region would massively repatriate funding back home; previously they were part of a boom-bust cycle in the CEE banking sectors. Definitely too much risk-taking took place during this period of time.

However, the perception of the main Western international banks deeply invested in the region as dedicated long-term investors (or FDI investors) was a completely different one. They remained confident in the long-term earnings prospects in the region. Therefore, there was a need for a short-term stabilising element or signalling device for the panicking market investors. The private-public sector coordination format Vienna Initiative emerged back then. In certain CE/SEE countries Western banks committed to keeping their exposures and funding constant in exchange for joint international financial institution (IFI) financing (mainly IMF/EU). In concrete terms, the actual scope of the Vienna Initiative was rather limited, but it had a very positive impact on the overall region. With the benefit of hindsight, it is clear that the Vienna Initiative did a great job in stabilising the macro-financial situation in times of massive uncertainty. In this context it is important to stress that not too much public money was spent to stabilise the macro-financial situation in CE/SEE, for example compared to the banking stabilisation measures in Western Europe.

So much for the past, because of course the current situation is more important. Currently, massive economic downsides are once again looming for the CEE region. For the banking sectors in CEE, hypothetical stress scenarios are currently becoming reality. In the stress tests of the European Banking Authority (EBA) of recent years, adverse macro scenarios for the CEE countries showed GDP declines of -1% to -3% per year. The cumulative GDP losses over two years then often resulted in slightly higher negative values. Now, unfortunately, such values are becoming reality. Currently we see one-year GDP hits (expected 2020 growth vs. realised 2019 GDP growth) of at least -5 to -8.5 percentage points – which is also close to macro shock assumptions in bank stress tests. Moreover, currently, risks to the downside for such assumptions are higher than risks to the upside. This holds especially true if no decisive recovery will materialise in the second half of the year.

Despite looming macro-stress scenarios, however, almost all banking sectors in CEE are currently in a much better fundamental position than they were prior to the global financial crisis (GFC). This applies to several dimensions. Firstly, credit growth has been moderate in recent years and risk-taking has therefore been highly disciplined in most cases. Hence, the upcoming asset quality deterioration should be less brutal. Moreover, currently a lot of tools are being discussed to help borrowers in challenging circumstances and not treat all loans that are not serviced temporarily as non-performing loans. Second, foreign currency credit risks are significantly lower than before the GFC in the CE/SEE banking sectors. Third, the capital buffers are much higher nowadays, including the additional systemic and countercyclical capital buffer build-up in faster-growing CE/SEE markets. In addition, local (re)financing has been significantly strengthened in recent years and there has been no external cross-border funding leverage as before the GFC. It is also important that we therefore see less fundamental external rebalancing need (e.g. current account reversals). Therefore, from a fundamental perspective – also against the background of the local banking sector conditions in CE/SEE outlined above – there should be fewer currency-related downside risks.

In conclusion, the major lenders active in the region should now be able to act as a stabilising element. This presupposes, however, that sensible nationally and internationally coordinated solutions are found here – within the EU and in the non-EU countries in CE/SEE where Western European banks are key systemic players. Here, we are thinking about sensible and coherent solutions with regard to special bank taxes, additional capital buffers or moratoria for household and corporate loans for the coming months. In countries like the Czech Republic or Slovakia we still have sizeable counter-cyclical capital buffers, while these had been already slashed in large parts of Western Europe. In Slovakia there is still a risk of a funding crunch induced by massive banking sector taxation. Some countries are moving into the direction of completely blocking potential dividend payments of local subsidiaries to their headquarters. Possibly an understandable solution from a national point of view, but here broader implications have to be carefully studied.

In order to address such questions in a sensible way a forum like the Vienna Initiative could be an ideal place to find coherent solutions and share best practices. Furthermore, such a forum would be the ideal platform to make sure that EU support (possibly via IFIs like the European Bank for Reconstruction and Development (EBRD) and the European Investment Bank (EIB)) could also arrive in the eastern part of the continent and in non-EU countries where the EU has vital economic and political interests. In this context one has to keep in mind that from the region only Slovakia and Slovenia could directly profit from the bold European Central Bank (ECB) support announced recently. Moreover, such a forum can bridge the gap between a few CE/SEE countries being part of the euro area, some at least part of the EU and others not EU candidates yet – with all the differences that emerge here in terms of banking sector regulation and practices.

Looking forward, we may also see the current crisis as an opportunity for a better-balanced relationship between politics and banks than in recent years. Banks will now have to play a key role in arresting insolvencies and in the much-needed macro stabilisation in the coming months. And we currently see major Western lenders active in CEE well positioned to play their role in this game. And here it is important to stress once again that efficient cross-border cooperation between the private and public sectors can significantly limit the resources needed for stabilisation — compared to an alternative scenario without such cooperation. This is probably one of the most important learning experiences from the Vienna Initiative 1.0; as the author, in cooperation with the US expert Rahel Epstein, pointed out in the quiet year 2019 in what was then a rather "academic intellectual exercise". And given the positive earnings trends in most CEE banking sectors in recent years, international banks active in the region are currently at least as confident as they were during the GFC that their presence in the region will continue to pay off in the long term.

ING: Russia balance of payments: supportive of ruble in the near-term, but risks for 2H21 mount.
5 days ago
ING: Growth in the Balkans: from zero to hero again?
11 days ago
FPRI BMB Ukraine: Most Ukrainians are optimistic about 2021 – poll
11 days ago
COMMENT: Record high debt levels will slow post-coronavirus recovery, threaten some countries' financial stability, says IIF
14 days ago
COMMENT: The Manafort Pardon: a finger in the collective eyes of Ukrainians
19 days ago