The Russian economy grew 4.3% y/y during the third quarter, but the post-coronavirus recovery is almost over 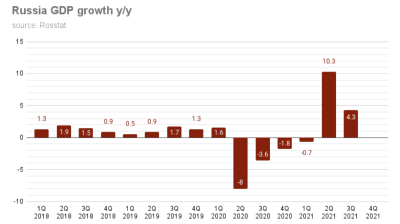 Russia's economy grew 4.3% in the third quarter, but that was down from 10.3% in the second – a record – as the post-COVID bounce-back is almost exhausted. / bne IntelliNews
By bne IntelliNews November 18, 2021

The Russian economy grew 4.3% y/y during the third quarter, but the post-coronavirus recovery is almost over. The result was close to Sova Capital’s expectation (+4.2% year on year) but below Bloomberg consensus (+4.5% y/y), according to RosStat’s preliminary GDP growth estimate for 3Q21 released on November 17.

“The solid 3Q21 figures were likely due to the still strong but waning momentum in retail and wholesale trade, manufacturing, and freight and passenger turnover,” Sova Capital said in a note.

At the same time, mining and quarrying along with the financial sector likely did better than in 2Q21, Sova Capital reports.

During the previous quarter, the economy grew 4.3% y/y, which is close to Sova’s forecast (+4.2% y/y) but below Bloomberg consensus (+4.5% y/y). The estimate is based on the production approach, which uses data from large and mid-sized enterprises in the non-financial sector.

Compared to 2Q21, most indicators saw their growth rates halve in 3Q21 vs. 2Q21, while the growth rates for retail and wholesale trade were four times lower.

“In our view, the main exceptions were mining and quarrying (+9.4% y/y), where the recovery in volumes has accelerated thanks to OPEC+ easing restrictions; and the financial sector, the growth in which came amid higher rates, although these were not enough to compensate for higher inflation and still buoyant demand for mortgages after the revision of the subsidized programmes,” Sova Capital reports.

Slovenia's retail sales went up by an annual 2.8% in December 2022, slowing significantly from the 7.4% y/y increase a month before.

65% of Serbians believe the reforms needed for EU accession should be carried out, but just 43% actually want Serbia to join the bloc, a new survey shows.