The war’s price tag for Russia will be high 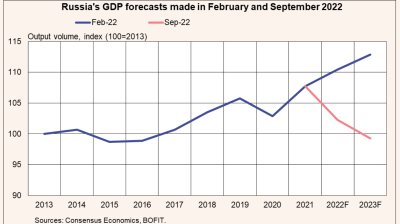 Putin's war in Ukraine will cost Russia at least $380bn in military expenses and lost growth over the next two years. / bne IntelliNews
By Ben Aris in Berlin October 20, 2022

How much will Russian President Vladimir Putin’s war in Ukraine cost the Russian economy? The military costs are going to run to at least $110bn or more, but the impact of the economic contraction and Russia’s isolation from the rest of the world will be far more expansive, Heli Simola, senior economist at the Bank of Finland Institute for Emerging Economies (BOFIT), said in a paper released on October 18.

“Russia’s war in Ukraine is, above all, a massive human tragedy and an assault on Ukraine’s economy and society. But Russia, too, will end up paying a high price for its cruel decision to wage war. The war’s price tag for Russia is, of course, impossible to estimate with any accuracy. But we can examine various indicators to illustrate the magnitude of the costs,” Simola said in her paper.

Before the war started Russia’s economy was expected to grow by a total of about 5% in 2022-2023, but as a result of the invasion and the “massive package” of sanctions that followed, now it is expected to contract by 8%-10% over the same period.

The most obvious cost is the cost of fighting the war itself in terms of the defence spending. Defence spending in 2022 will be up by at least RUB1,200bn compared with the pre-war budgeted total. According to Russia’s provisional 2023-2025 budget, its defence spending for that period is being raised by a total of RUB2,600bn above the previously budgeted figure.

“So, since the start of the war, the country’s defence spending is being increased by at least RUB3,700bn (approx. $53bn at this year’s official average exchange rate),” says Simola.

However, more war spending can be included as “national security spending” in the budget and this has been boosted in 2022-2025 as well, by RUB3,700bn above the previously budgeted level.

Adding these numbers and that means an additional RUB7,400bn ($110bn, or almost 6% of the 2021 GDP total) is being spent on the military and security services.

“The expenditure total may even be greater than this, as not all budget spending is itemised,” says Simola. “It is also possible that the level of spending might be raised further beyond the budgeted figure.”

More difficult to assess is the lost opportunity cost – the money Russia could have made if it had spent these funds on doing something positive. For example, Ukraine estimates the total cost of the war at between $700bn and $1 trillion, the cost of physical destruction at just over $100bn in terms of value and around $180bn in terms of what it will cost to rebuild it. The rest is lost growth, the lost devaluation of the currency, the departure of bond investors, and all the other might-have-beens if Russia had not started a war.

“Without the war, the Russian state could have used these funds for advancing the wellbeing of its citizens. Instead, to fund its war, the Russian state will have to cut expenditure on more beneficial matters such as road construction and science promotion. Additional defence spending may boost output in the military industry, but it will not enhance the wellbeing of the country’s citizens,” says Simola.

The really difficult one to value is the long-term stagnation that the Western sanctions on technology will bring about. Russia’s growth potential before the war was an estimated 1.5% as Putin was diverting so many resources away from investment and into building up his financial fortress, but sanctions have reduced that potential further.

“The war and the consequent economic sanctions imposed on Russia have added enormously to uncertainty in the Russian economy. For a long time to come it will be very difficult for Russia to obtain finance from international markets, and especially to attract foreign investment. The economic sanctions imposed on Russia by many countries place powerful restrictions on the opportunities for it to access high technology and also many other key imported goods,” says Simola. “Productivity is diminishing. As a consequence of the war, hundreds of thousands of citizens have already fled Russia. This could mean that the more highly educated section of the workforce, in particular, will also shrink in the longer run.”

BOFIT estimates that the long-term growth potential of Russia may now only be 0.5%-1%, which means that Russia will not return to its pre-war size even by the end of the decade.

The World Bank expects global growth to moderate from 5.9% in 2021 to 2.9% in 2023 and growth will be hobbled going forward by the unfolding polycrisis. However, even at these low rates Russia will now steadily fall behind the rest of the world and fall down the rankings in terms of the size of its GDP. Prior to the annexation of Crimea in 2014 it was on course to overtake Germany’s economy in dollar GDP terms to become the richest country in Europe.

Russia is the most prosperous country of all the Former Soviet states that didn’t join the EU in GDP per capita thanks to its oil production and in purchasing power parity terms it is on a par with the lower end of the EU.

That’s going to change. The total cost of the missing GDP growth over the next two years plus the defence spending comes to a total of $380bn, but taking into account the lost opportunity costs, that number should be almost ten times higher if you read across from Ukraine’s experience.

On the ground, what that means in practice is a steady fall in the quality of life for Russians. The range of products and services available to the public has already been truncated by sanctions and the domestic substitutes are mostly of inferior quality and more expensive. The fall in real incomes is expected to accelerate in the second half of this year as the changes start to become more visible. The final irony is that eventually Ukraine, which can expect an investment boom should peace return, will overtake Russia in terms of growth, income and quality of life.

MEDUZA: Ukrainian strikes on targets inside Russia could mark a new phase in the war
bneGREEN: War in Ukraine speeds up global transition to renewable energy
CESEE banks expect credit conditions to tighten and NPLs to rise

China has won water dispute with Kazakhstan
13 hours ago
bneGREEN: Vertical farms to feed the cities of the future
21 hours ago
PM’s attempt to quell Mongolia’s ‘coal mafia’ protests drowned out by livid crowds
1 day ago
Italian PM Meloni outlines new ambitious plan for Africa
1 day ago
Turkmenistan: A shining city in a book of records
1 day ago