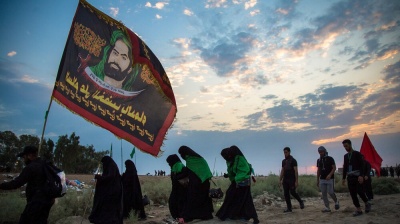 Around 3mn Iranians are crossing the border into Iraq on the Arbaeen annual pilgrimage, now more popular with people in the Islamic Republic than the annual Hajj.
By bne IntelliNews October 16, 2019

Officials say at least 3mn Iranians have crossed the border into Iraq as part of the annual Islamic Arba’een pilgrimage, Tasnim news agency reported on October 15.

Arba’een, which brings about one of the largest religious gatherings in the world—and is sometimes dubbed the biggest movement of men, women and children on the planet—comes 40 days after Ashura, the martyrdom anniversary of the grandson of the Prophet Mohammad and the third Shia Imam Hussein. Seen as a more accessible and affordable way of showing piety than the annual Hajj to Saudi Arabia, which is strictly limited by the setting of a maximum number of places for each country, Arba’een has become increasingly popular with Shi’ite Iranians, who visit the shrines of their saints in neighbouring Iraq, where they gather in the holy city of Karbala, 100 kilometres southwest of Baghdad.

Iran’s deputy interior minister for security affairs confirmed the number of pilgrims crossing the border—it is thought to be the biggest movement of Arba’een pilgrims into Iraq since Baghdad gave the green light to the Iranian pilgrimage a decade ago.

The minister said that 60% of the pilgrims were using the Mehran border crossing. This year, the four border points of Khosravi, Mehran, Chazzabeh, and Shalamcheh are open for Arbaeen travellers.

Later on October 15, Kourosh Mavaddat, Special Governor for Khorram Shahr on the border with Iraq, said: “52,000 pilgrims entered Iran through the Shalamcheh border crossing and 34,000 others have moved into Iraq via the frontier to head towards the Iraqi city of Karbala over the past 24 hours.”

He added that 3,400 foreigners from Pakistan, Azerbaijan, Afghanistan and Central Asian countries have also crossed into Iraq via the Shalamcheh border crossing.

With interest in Arba’een continuing to grow, Iraq and Iran have mutually relaxed visa requirements.

In 2018, it was reported that some 18mn visas were issued by Iraq to Iranians entering the country.

Iran will observe the pilgrimage with a religious holiday on October 19.

Partly with regard to the economic hardship experienced by some pilgrims, several Iranian organisations with medical and food supplies situate themselves along the route towards the Mehran border crossing, and also at points beyond it in Iraq.

A big security operation, using drones, is mounted by Iran along routes of the pilgrimage.

A report from The Associated Press on May 12 painted a harrowing picture of just how hard doctors and nurses in Iran have been hit by the country’s coronavirus (COVID-19) emergency ... more

SAIPA, which recently overtook Iran Khodro (IKCO) to become Iran’s largest carmaker by production volume, has started a test run of its new mid-sized sedan, the Shahin (or “Shahin ... more