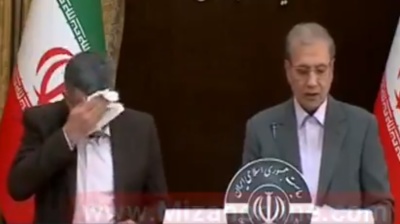 The first member of the Iranian government to contract coronavirus, Deputy Health Minister Iraj Harirchi, has been put in quarantine.
By bne IntellIiNews February 25, 2020

At least two top officials in Iran have confirmed they have contracted the coronavirus Covid-19 virus, local media reported.

Officially 15 people have died from the coronavirus outbreak in the country with another 95 now reported infected. However, on February 24, an MP in the country’s parliament for Qom, the site of the worst outbreak in Iran, said more than 50 people had died in his city alone, a claim later backed up by Iran Labour News Agency (ILNA).

Iran’s Deputy Health Minister Iraj Harirchi reported earlier on February 24 he had contracted the virus and been placed in isolation. Later in the day, Reformist Tehran MP Mahmoud Sadeqi also announced he had contracted Covid-19.

“I contracted coronavirus, too,” Harirchi said in a video on social media, after he appeared at a joint press conference with government spokesman Ali Rabiei. Rabiei was later photographed holding a tissue over his face in a cabinet meeting.

He said in his video that he was sure the country “would come out victorious” in the next couple of weeks, adding he was given assurances the government would deal with the outbreak.

Earlier on February 24 Haricihi went on national Islamic Republic of Iran Broadcasting (IRIB) where he began coughing live on stage, spooking the presenter.

Qom has now become the epicentre of infection in the Islamic Republic, with more than 320 people now suspected to be suffering from the virus in that city alone. Qom is not under any form of quarantine and roughly 10,000 people a day travel to and from the city to Tehran and elsewhere.

Reports from the BBC Persian service say that reporters in the city are now being pressured by the authorities not to publish statistics on those infected. Several reports of stores being emptied as residents stockpile essentials have spurred further panic about infection.

Mohammad Reza Ghadir, the head of Qom University of Medical Sciences, who announced the severity of the rate of infection, is also now reported to have contracted the virus and been placed in quarantine.

Hospitals across the city of Qom are reportedly now full of patients suffering from respiratory illnesses, many of them not officially diagnosed as coronavirus, one source said from the city.

“Whether or not they really have a corona is unknown, because doctors are not allowed to have a test kit,” one doctor told the Persian service.

At present, cases have been identified in the provinces of Tehran, Markazi, Isfahan, Gilan, Mazandaran, Hamedan, Qazvin, Alborz, and Golestan and Qom.

Government coffers seen as empty after currency crisis fight. “Fearful of joining the army of unemployed, many workers have had no choice but to brave the virus danger,” says economist.