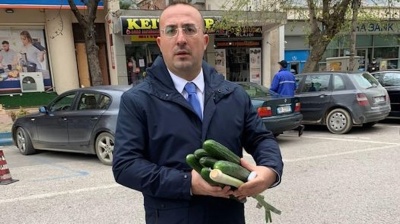 Democratic Party MP Saimir Korreshi went to the parliament carrying cucumbers and a leek to demonstrate his support for farmers. / Saimir Korreshi
By bne IntelliNews November 15, 2021

One MP from Albania’s opposition Democratic Party came to the parliament with an armful of cucumbers and a leek and others laid into the Socialist government at the ensuing plenary session, as opposition politicians throw their weight behind farmers who have been protesting for days.

Farmers were angered by the draft 2022 budget and are demanding a revision and more support from the government, as they say the pandemic disruptions and the recent hike in prices of critical inputs such as energy and fertilisers are pushing them towards bankruptcy.

The protests started in the town of Lushnjë, southern Albania, where farmers from the Myzeqe region clashed with police on November 12. On November 15, the protests in Lushnjë continued peacefully; farmers marched through the town and invited passersby to help themselves from boxes of fruit and vegetables.

According to farmers, the cost of agricultural inputs has soared by between 50% and 100% as a result of the global energy crisis that has erupted as international economies recover from the pandemic.

Farmers have issued a list of six requests including for a direct subsidy for their production; subsidies for exporters; for the VAT rate on sales to be aligned with that of purchases; the withdrawal of the 10% value added tax (VAT) on agricultural inputs; government action to improve quality checks for agricultural products including the launch of accredited labs; and, legislation to regulate commercial relations within the sector to help farmers ensure they are paid for their products.

“I am following closely the protests of the farmers of Myzeqe. Aware of their demands for the improv[ement] of the fiscal package related to agricul[ture], I emphasise the import[ance] of establ[ishing] a dialogue as soon as poss[ible], for the eval[uation] by the govern[ment] of the proposals that they have made,” Meta wrote on Twitter on November 15, posting a video of hundreds of farmers marching through Lushnjë.

“Support of the agricultural sector is vital for the country's economy, as well as listening to the voice of farmers is essential,” Meta added.

In an address to the parliament on November 15, Basha slammed the government over its treatment of the agricultural sector.

“Agriculture, which accounts for almost 20% of gross domestic product, receives in return the lowest support compared to the other Balkan countries, incomparable to [that in] the Republic of Kosovo or North Macedonia, to name just two very young countries, younger than Albania and smaller than Albania,” Basha told MPs.

“And this indubitably makes the products of its farmers uncompetitive. It destroys them. While farmers and ranchers seek serious support, the only answer that comes is police violence against them. It is violence to extinguish their voice, it is violence to extinguish their just protest. Even now we are talking, farmers are on the streets, they are in the square for their rights, for their survival and their families, to get what their colleagues in Kosovo and North Macedonia … enjoy every day.”

Basha linked the situation of Albania’s farmers with the payouts Albania has had to make as a result of losing international legal cases, amounting to €388mn lost from the state budget.

The Democratic Party MP representing the Lushnjë region, Saimir Korreshi, turned up at the parliament plenary session on November 15 carrying cucumbers and a leek — which he stressed were organic — to highlight his support for local farmers.

“When farmers come to the square there is no God who can stop them,” Korreshi wrote on Facebook.

“Listen, you miserable man who runs this country, they may tear the mask off your deceptions with their bare hands.”