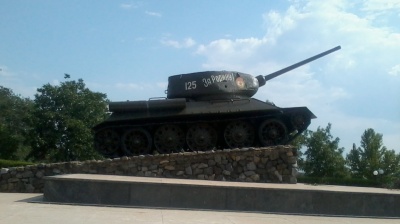 A monument in Tiraspol, capital of the self-declared republic of Transnistria in Moldova.
By Iulian Ernst in Bucharest July 25, 2022

The foreign minister of the unrecognised separatist region of Transnistria in Moldova, Vitali Ignatiev, restated the region’s commitment to firstly gain its independence and then become part of Russia, at a press conference in Moscow, according to Ria Novosti news agency.

Ever since Russia’s invasion of Ukraine there have been concerns about Russia potentially establishing a land bridge with Transnistria — which lies along Moldova’s eastern border with Ukraine — or of the republic, and thus Moldova, becoming embroiled in the war.

Speaking in Moscow, Ignatiev pointed to the public referendum carried out in the Russia-backed republic in 2006, which set the grounds for independence followed by joining Russia.

Ignatiev also criticised the Moldovan authorities, whom he accused of undermining the negotiations on Transnistria’s integration in Moldova by deciding, with no prior negotiations, to become a candidate for EU membership.

Moldova’s Prime Minister Natalia Gavrilita said in an interview with CNN on July 23 that Chisinau is worried about a potential invasion by Russia.

“This is a risk, it’s a hypothetical scenario for now, but if the military actions move further into the southwestern part of Ukraine and toward Odesa, then of course, we are very worried,” Gavrilita told CNN’s Fareed Zakaria GPS.

Moldova’s parliament speaker Igor Grosu said in May that officials in Transnistria are divided between the pro-war camps and those who do not want the republic to become involved in the war.

The statements by the separatist foreign minister were not directly backed by top Russian officials, only by lower-rank, mainly political representatives. Russia has not yet recognised Transnistria’s independence, but these are exactly the type of reactions from political representatives that prepare the ground for formal recognition, if and when necessary.

The Russian president’s press secretary Dmitry Peskov refused to comment on Ignatiev’s statements, according to Tass.

"Today, Transnistria is that enclave of Moldova that does not want to be with Romania and, at the same time, gladly accepted the Russian peacekeeping contingent," Belik said in a statement sent to Ria Novosti.

“So, Transnistria's proposal to join Russia does not belong to the distant future. Rather, for them, it is a direction related to the near future. And because Russian speakers who are close to us in mentality live there, we must seriously consider this proposal," said the Russian deputy.